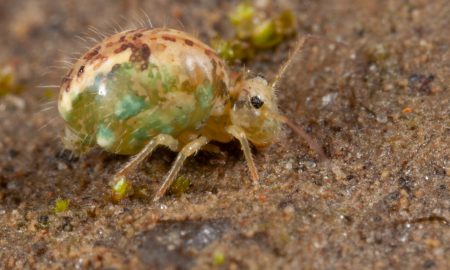 The lucerne flea is an introduced pest commonly found in New South Wales, Victoria, Tasmania, South Australia and Western Australia. It is a green-yellow globular insect commonly found in broadleaf crops and pastures. Lucerne fleas have a furcula underneath their abdomen that acts like a spring and enables them to ‘spring off’ vegetation when disturbed. Synthetic pyrethroid sprays are not effective. Grazing management, border sprays or spot spraying may be sufficient to control lucerne flea populations.

Lucerne fleas (sometimes also known as clover springtails) are common pests found in New South Wales, Victoria, Tasmania, South Australia and Western Australia. Higher numbers are often found in the winter rainfall areas of southern Australia, including Tasmania, or in irrigation areas where moisture is plentiful. They are generally more problematic on loam/clay soils. Lucerne fleas are often patchily distributed within paddocks and across a region.

The lucerne flea is a springtail; this is a group of arthropods that have six or fewer abdominal segments and a forked tubular appendage or furcula under the abdomen. Springtails are one of the most abundant of all macroscopic insects and are frequently found in leaf litter and other decaying material, where they are primarily detritivores. Very few species, including the lucerne flea, are regarded as crop pests around the world.

The adult lucerne flea is approximately 3 mm long, light green-yellow in colour and often with mottled darker patches over the body. They are wingless and have enlarged, globular shaped abdomens. They are not related to true fleas. Newly hatched nymphs are pale yellow and 0.5-0.75 mm long, and as they grow they resemble adults, but are smaller.

Female lucerne fleas lay their eggs in the ground in batches of 20-60. Newly hatched nymphs generally resemble adults but are only about 0.75 mm long and pale yellow in colour. Depending on temperatures and moisture availability, lucerne fleas can have up to 6 generations per year between autumn and spring. The length of each generation can be from 3-5 weeks. The first generation often hatches from over-summering eggs in March-April after soaking autumn rainfall. In mid to late spring lucerne fleas die off from the onset of warmer weather leaving over-summering eggs on soil surface. The rate of growth of lucerne flea populations is very moisture dependent; they do well in moist conditions or under dense canopies of pasture.

Lucerne fleas have a furcula underneath their abdomen, which acts like a spring and enables them to ’spring off’ vegetation when disturbed. This pest is distinctively patchy in distribution. These patches of intense feeding can move around paddocks, and can be obvious targets of spot spraying.

Other springtails (Collembola), including other plant-feeding springtails that are more solitary in habit.

All crops and pastures, but broadleaf plants including lucerne and clover are particularly susceptible to attack. They can also cause considerable damage to canola, field peas, lupins, faba beans, ryegrass, wheat and barley. Lucerne flea also feeds on weeds including shepherd’s purse, chickweed, common sow thistle and wild radish.  Capeweed is a favoured weed host.

Lucerne fleas move up plants from ground level, eating tissue from the underside of foliage. They feed through a rasping process, leaving behind a thin clear layer of leaf membrane that appears as transparent ‘windows’ through the leaf. In severe infestations this damage can skeletonise the leaf and stunt or kill plant seedlings. Crops and pastures are most susceptible at the time of emergence.

Lucerne fleas feed through a rasping process, which results in the characteristic appearance of feeding ‘windows’ through the leaf.

Crops should be inspected frequently at, and immediately following crop emergence, when plants are most susceptible to damage. Pastures should be monitored at least fortnightly from autumn to spring, and more often in paddocks with previous lucerne flea problems. Lucerne fleas are often concentrated in localised patches so it is important to monitor paddocks entirely. Examine foliage for feeding damage, and check the soil surface for sheltering insects. Damage levels can be used to determine whether or not spraying is necessary. Monitoring usually involves working on hands and knees. Monitoring populations for growth stage as well as numbers can also be important for accurate timing of sprays.

Alternatively, lucerne fleas can be sampled using a standard petrol powered garden blower/vacuum machine. A fine sieve or stocking is placed over the end of the suction pipe to trap mites vacuumed from plants and the soil surface.

As a guide, an average of 20 small holes per trifoliate legume leaf may warrant chemical control. If pasture is severely damaged it may be cost effective to spray (Bailey 2007).

The pasture snout mite and spiny snout mite are effective predators, particularly in pastures where they can prevent pest outbreaks. Spiders and ground beetles also prey on lucerne flea. The complex of beneficial species should be assessed before deciding on control options.

Grazing management by reducing the height of pasture will limit food resources and increase mortality of lucerne fleas. Control broadleaf weeds (e.g. capeweed) to remove alternative food sources that would otherwise assist in population build up. In pastures, avoid clover varieties that are susceptible to lucerne flea damage, and avoid planting susceptible crops such as canola and lucerne into paddocks with a history of lucerne flea damage.

In paddocks where damage is likely, a border spray may be sufficient to prevent movement of lucerne fleas into the crop from neighbouring paddocks. Lucerne fleas are often patchily distributed within crops, so spot spraying may be sufficient. Do not blanket spray unless the infestation warrants it.

If the damage warrants control, treat the infested area with an insecticide three weeks after lucerne fleas first emerge in autumn. This will allow for the further hatching of over-summering eggs but will be before they reach maturity and begin to lay winter eggs. Where there is a consistent pattern of lucerne flea damage in autumn/early winter, spray four weeks after the first significant rain of the season.

In pasture, best results are achieved by spraying when there is sufficient leaf matter for the insects to feed on and shelter under. This is usually about seven days after a paddock has been cut for hay or heavily grazed, rather than immediately after hay making or grazing.

Lucerne fleas have a high natural tolerance to synthetic pyrethroids and should not be treated with insecticides from this chemical class. When both lucerne fleas and redlegged earth mites are present, it is recommended that control strategies consider both pests, and a product registered for both is used at the highest directed rate between the two to ensure effective control.

A border spray or spot spraying may be sufficient to control lucerne flea numbers. Synthetic pyrethroid insecticides are not effective.

Bishop All, Harris AM and McKenzie. 2001. Distribution and ecology of the lucerne flea, Sminthurus viridis (L.) (Collembola: Sminthuridae), in irrigated lucerne in the Hunter dairying region of New South Wales. Austral Entomology 40: 49-55.

Greenslade P. 2014. The potential of Collembola to act as indicators of landscape stress in Australia. Australian Journal of Experimental Agriculture 47: 424–434.

Gu H, Fitt GP and Baker GH. 2007. Invertebrate pests of canola and their management in Australia: a review. Australian Journal of Entomology 46: 231-243.