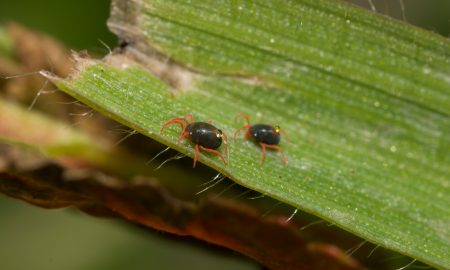 Blue oat mites are major agricultural pests of southern Australia attacking various pasture, vegetable and crop plants. There are three pest species of blue oat mites that differ in their distributions, pesticide tolerances and host plant preferences. Spring spraying using TIMERITE® against blue oat mites is not recommended as it is largely ineffective.

Blue oat mites are important crop and pasture pests in southern Australia. They are commonly found in Mediterranean climates of Victoria, New South Wales, South Australia, Western Australia and eastern Tasmania. They are also found in parts of southern Queensland. There are three main species of blue oat mite; Penthaleus major, Penthaleus falcatus and Penthaleus tectus. These species differ in their distributions.

The three recognised pest species of blue oat mite are morphologically very similar. A microscope is required to distinguish the morphological differences between Penthaleus major, Penthaleus falcatus and Penthaleus tectus. P. major has long setae arranged in four to five longitudinal rows, while P. falcatus has a higher number of short setae scattered irregularly. P. tectus has setae of medium length and number.

Adult blue oat mite are approximately 1 mm in length and have a blue-black body with a distinctive red mark on their back. They have eight red-orange legs. The nymphs are pinkish-orange in colour with six legs on hatching, but soon change colour to brownish and then green, before reaching the adult stage.

There are three morphologically similar species of blue oat mites that differ in their distributions, pesticide tolerances and host plant preferences.

Blue oat mites are active in the cool wet part of the year, usually between April and late October. During this time they pass through two or three generations, with each generation lasting eight to ten weeks. They spend the remaining months protected as diapause or over-summering eggs that are resistant to the heat and desiccation of summer. These eggs hatch in autumn following cool temperatures and adequate rainfall, when conditions are optimal for mite survival. The climatic conditions are similar, but probably different to those that trigger egg hatch of redlegged earth mites. Swarms of young mites will then attack emerging crop and pasture seedlings.

Female mites deposit eggs either singly or in clusters of three to six on the leaves, stems and roots of food plants or on the soil surface.

Blue oat mites often coexist with redlegged earth mites and both are typically active from autumn to late spring. Blue oat mites spend the majority of their time on the soil surface, rather than on the foliage of plants. They are most active during the cooler parts of the day, tending to feed in the mornings and in cloudy weather (particularly in spring). They seek protection during the warmer part of the day on moist soil surfaces or under leaf litter, and may even dig into the soil under extreme conditions.

Redlegged earth mites, Balaustium mites and Bryobia mites. The orange-red patch on the back of blue oat mites is unique and generally quite conspicuous when viewed with a hand lens.

All crops and pastures are vulnerable to attack and they are most susceptible at the seedling stage. Host plant preferences for the three species are as follows: P. major – pastures, cereals and pulses; P. falcatus – mainly found on canola, but also on broad-leaved weeds such as Paterson’s curse, bristly ox-tongue, smooth cat’s-ear and capeweed; P. tectus – mainly found on cereals, but also on pastures and some pulses.

Feeding causes silvering or white discoloration of leaves, and distortion or shrivelling in severe infestations. Mites feed singularly and not in large groups.

Inspect susceptible pastures and crops from autumn to spring for the presence of mites and evidence of damage. It is important to inspect crops regularly in the first three to five weeks after sowing. Mites are best detected feeding on the leaves in the morning or on overcast days. If mites are not observed on plant material, inspect the soil for mites. An effective way to sample mites is to use a standard petrol powered garden blower/vacuum machine. A fine sieve or stocking is placed over the end of the suction pipe to trap mites vacuumed from plants and the soil surface.

Mites are most reliably detected on leaves in the morning or on overcast days.

Predatory mites can be effective natural enemies of blue oat mites and non-preferred crops and weed management helps to control these mites.

Chemicals are the most common method of control against earth mites. Unfortunately, all currently registered pesticides are only effective against the active stages of mites; they do not kill mite eggs. While a number of chemicals are registered in pastures and crops, differences in tolerance levels between species complicates management of blue oat mites. P. falcatus has a higher tolerance to a range of pesticides and this is often responsible for chemical control failures. Ensure pesticide sprays are applied at the full registered rate. P. major and P. tectus have lower tolerances to pesticides and are more easily controlled.

For low-moderate mite populations, insecticide seed dressings are an effective method. Avoid prophylactic sprays; apply insecticides only if control is warranted and if you are sure of the mite identity. Pesticides used at or after sowing should be applied within three weeks of the first appearance of mites, before adults commence laying eggs. Spring spraying using TIMERITE® is largely ineffective against blue oat mites and is not recommended.

While a number of chemicals are registered in pastures and crops, differences in tolerance levels between species complicates management of blue oat mites.