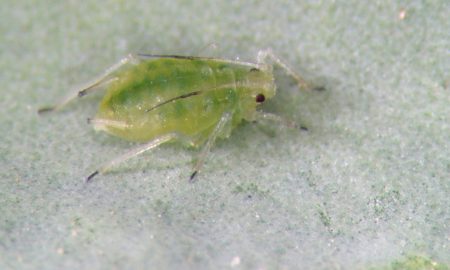 Green peach aphid is widespread within Australia and damaging to a range of horticultural and broadacre crops. Their body colour is variable ranging from yellow, green, and orange to pink. Green peach aphid can be difficult to control due to the development of resistance to several chemical groups. Rotating chemical groups and taking advantage of biological control are essential to extend the useful life of the available chemistries.

Green peach aphid is a common pest of several broadacre (canola and pulses), broadleaf pastures and horticultural crops throughout Australia. They infest or seek refuge on several broadleaf weed species.

Aphids are a group of soft-bodied bugs commonly found in a wide range of crops and pastures. Identification of crop aphids is very important when making control decisions. Distinguishing between aphids is easier in the wingless form.

The green peach aphid grows up to 3 mm long and varies in colour from shiny pale yellow-green, green, orange or pink. Adults are oval-shaped and can be winged or wingless. Winged adults (alates) have a dark patch on the abdomen, while wingless adults are usually quite uniform in colour. Nymphs are similar to wingless adults but smaller in size.

It is important to correctly identify aphid species in crops, as green peach aphid has developed resistance to several chemical groups.

Winged aphids fly into crops from weeds, pastures and volunteers, and colonies of aphids start to build up within the crop. Aphids can reproduce both asexually and sexually, however in Australia, the sexual phase is often lost. Aphids reproduce asexually whereby females give birth to live young, which are often referred to as clones. This means that genes are passed clonally through successive generations and insecticide resistance can quickly establish in aphid populations.

Temperatures during autumn and spring are optimal for aphid survival and reproduction. At daily maximum temperatures of 20-25°C, one generation can take approximately 2-3 weeks.

Early in the season, the date of first arrival of aphids flying from pastures or weeds into crops is sometimes related to the timing and magnitude of rainfall events in late summer and autumn. Rainfall stimulates plant growth before the winter cropping season, providing hosts that encourage rapid aphid reproduction. Aphid flights during early crop emergence can result in early crop infestation, increasing the risk of the early spread of plant viruses.

Other aphids, in particular the turnip aphid and blue green aphid.

Green peach aphid has a very wide host range, including oilseeds, lupins, pulse crops, broadleaf weeds and some broadleaf pastures. They are common in many horticultural crops including crucifer vegetables. Non-crop hosts include capeweed, marshmallow, wild radish, wild turnip, Lincoln weed and other cruciferous weeds. Weeds and volunteer crop plants growing in summer and autumn, often referred to as the ‘green bridge’, provide a refuge for aphid populations to survive between cropping seasons. Green peach aphid has occasionally been found on cereals such as wheat, however it not thought to cause feeding damage.

Green peach aphid often causes less direct feeding damage than other aphid species, but is an important vector of plant viruses. In canola, direct damage by green peach aphid can occur during autumn and early winter, and occasionally during spring. Infestations start when winged aphids fly into crops from autumn weeds, with heavy infestations causing leaf distortion, wilting of cotyledons, leaf senescence and seedling death. Although they may be found in canola at later stages of the crop, in most seasons numbers are insufficient to cause significant yield loss through feeding. In southern Australia, the same is largely the case for pulse crops as well.

Green peach aphid causes indirect damage by spreading plant viruses. Aphids spread viruses between plants by feeding and probing as they move between plants within or between paddocks. The ability to transmit particular viruses differs with each aphid species, and viruses may be transmitted in a persistent or non-persistent manner (see below). This influences the likelihood of plant infection.

Green peach aphid is an important vector of plant viruses including turnip yellows virus (TuYV, syn. beet western yellows virus, BWYV), cauliflower mosaic virus (CaMV), turnip mosaic virus (TuMV), and cucumber mosaic virus (CMV), all of which cause damage in canola. These viruses are widespread, and surveys have found that in many situations most crops have some infected plants. TuYV is not seed-borne. The virus survives in weeds or volunteer host plants during the summer and is then carried from these plants into crops by aphids that act as a vector for transmission. Yield loss is greater in crops that have been infected at the seedling stage. Viral infections that occur after the rosette growth stage often have little effect on yield.

TuYV infects the phloem of plants and is a persistently-transmitted virus. Persistent viruses are carried in the aphid’s body for its entire life and can be transmitted to healthy plants during feeding; the aphids therefore remain infective throughout their life. It requires only 15-30 minutes of feeding for the aphid to infect a plant. CaMV and TuMV are non-persistent viruses and are only retained in the aphid mouthparts for less than 4 hours.

Green peach aphid can cause damage by transmitting plant viruses such as turnip yellows virus and cucumber mosaic virus, and by direct feeding when in high numbers.

Summer weeds should be monitored at least occasionally for aphids. In virus-prone areas or after a period of high rainfall, regular aphid monitoring from autumn onwards is strongly recommended to detect aphids moving into crops, particularly along paddock edges. When virus risk is considered low, monitor cotyledons and young plants to assess the risk of direct feeding damage.

Aphids will generally move into paddocks from host weeds or volunteers located on roadsides, paddock edges or neighbouring paddocks. Damage often appears initially on crop edges, which should be monitored. Inspect the underside of plant leaves. Aphid distribution may be patchy, therefore monitor at least five representative sampling points across the paddock. Inspect at least 20 plants at each sampling point.

Aphid infestations can be reduced by heavy rain events or sustained frosts. Re-monitor paddocks after heavy rain before making spray decisions. Symptoms of virus infections are highly variable, ranging from no visible indications to stunted red plants and stiffening of leaves for TuYV, chlorotic ring spots and mottling for CaMV and yellow mosaic patterning and tip necrosis for TuMV.

Economic thresholds for direct feeding damage have not been established for green peach aphid. In most situations, green peach aphid insecticide treatment to prevent direct feeding damage will not be economic. Thresholds for managing aphids to prevent the incursion of aphid-vectored virus have not been established; however, virus can be transmitted by relatively few individuals, even prior to their detection within a crop.

There are many effective natural enemies of aphids. A range of generalist predators, such as hoverfly larvae, lacewings, ladybird beetles and damsel bugs, can significantly reduce populations. Parasitoid wasps lay eggs inside bodies of aphids; Evidence of parasitism is seen as the presence of bronze-coloured enlarged aphid ‘mummies’. As mummies develop at the latter stages of wasp development inside the aphid host, it is likely that many more aphids have been parasitized than indicated by the proportion of mummies. Naturally occurring aphid fungal diseases (Pandora neoaphidis and Conidiobolyus obscurus) can also suppress aphid populations. Broad-spectrum insecticide applications can severely disrupt biological control by natural enemies.

Where feasible, sowing into standing stubble and achieving early canopy growth to reduce bare ground can reduce the risk of aphid landings within the crop.

Insecticides should only be applied when necessary, and after careful monitoring and correct identification of species. There are several insecticides registered against green peach aphid (see APVMA for current options). However, almost all populations have developed resistance to multiple chemical groups.

Growers and advisers are strongly encouraged to download the comprehensive resistance management strategy for green peach aphid in Australian canola. It has been developed to help growers effectively control this pest, while at the same time minimising the selection pressure for further resistance development.

Where there is a high risk of virus spread, use of an insecticide seed treatment is recommended to reduce aphid infestation and virus risk. If monitoring detects aphids moving into crops during in autumn/early winter, a border spray may provide sufficient control without the need to spray the entire paddock.

Judicious use of insecticides and taking advantage of biological controls are essential to extend the useful life of the available chemistries.