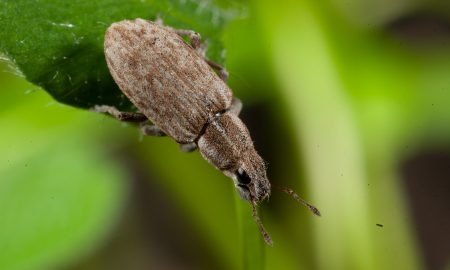 These small weevils are commonly associated with medic pastures and lucerne, and can be identified by a short, broad snout and three pale stripes on the thorax. The adults can be particularly destructive to emerging seedlings in autumn, and larvae can stunt plant development in spring.

Native to the Mediterranean region, sitona weevil has been introduced to Australia, Europe, North Africa, South Africa and New Zealand. In Australia it is a widely distributed and sporadic pest that is a major problem in South Australia, and minor in New South Wales, Victoria, Tasmania, Queensland and Western Australia.

Adults are 3-5 mm long and greyish-brown in colour with three characteristic pale (white-yellow) stripes on the thorax behind the head. They have a short, broad snout and are capable flyers. Larvae are white and legless, with an orange-brown head capsule and grow up to 5 mm long and live in soil near plant roots.

Adults are active on winter pastures from spring to autumn. Eggs are laid in autumn in soil around the base of plants. Larvae hatch at opening rains, burrow into the soil and feed through winter into spring. Pupation takes place in the soil and adults emerge in late spring/early summer and remain active until autumn.

Sitona weevils are most commonly found in the soil, under medic and lucerne pastures. Adults can fly considerable distances, so infestations can start without a previous history of damage.

Larvae are similar to larvae of the small lucerne weevil and the vegetable weevil. Adults can be confused with the whitefringed weevil, which are typically twice the size of sitona weevil.

As both adults and larvae feed on host plants, damage may occur at any time during the growing season. Adults make scallop-shaped notches on leaf margins and chew the stems of seedlings and established plants. Heavy infestations can lead to complete defoliation of plants. Larvae feed on root hairs and root nodules, which can slow plant growth and reduce the plants’ ability to fix nitrogen. Older larvae feed on lateral and taproots. Affected plants may lack vigour and look pale in appearance.

If adults are active during seed germination at the break of season, they will feed on leaves and stems, potentially killing the young plants.

Damage may occur at any time of the season, but feeding during autumn is typically the most critical. Lucerne and medic seedlings should be monitored in autumn to detect signs of damage by adult sitona weevil. Inspect root nodules for the presence of larvae. In spring, look for signs of chewing damage on plants as well as a loss of plant vigour. It is best to search for adults at night by inspecting plants and looking directly on the soil surface. Pitfall traps are also an effective technique to assess the abundance of adult sitona weevils.

A parasitoid wasp (Microctonus aethiopoides) was released into Australia in 1977 as a biocontrol agent for adult sitona weevils, which it can kill or at least reduce fecundity of females.

Sowing non-preferred crop types may be useful in paddocks with a history of sitona weevil problems. Delay sowing on medics and pastures to late autumn/early winter after flights of sitona weevil have ceased.

There are several insecticides registered for control of sitona weevils, however the economic returns of spraying are questionable. Adults should only be controlled if there are large numbers causing extensive leaf loss. Larvae are protected in the soil and cannot be effectively controlled with chemical sprays.