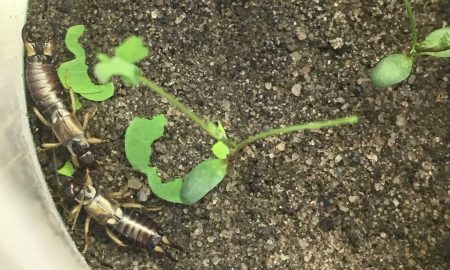 The European earwig is an invasive species and is widespread throughout southern, south-eastern, and south-western regions of Australia. It has a very broad host range, eating a variety of broadacre and horticultural crops, as well as dead and living plant and animal material. Canola and some legume crops are particularly susceptible to damage. European earwig control options are limited in broadacre crops, especially chemical control. There are no known natural enemies which can effectively control the European earwig in Australia. Soil tillage may help suppress earwig numbers and disrupt breeding sites.

The European earwig is an invasive, temperate species in Australia; its native range includes Europe, West Asia and northern Africa.1

The European earwig was likely introduced to Australia prior to the 1900s and it is now widespread throughout areas of Victoria, Tasmania, South Australia, southern New South Wales, and south-western Western Australia.1,2

The current distribution of the European earwig in southern Australia is associated with human-influenced environments (e.g. cropping).2

No-till practices and stubble retention likely provide a more favourable environment for the European earwig. It is thought that the increased uptake of these practices is driving population growth on broadacre farms.

Adult European earwigs are 12-24 mm long and are smooth, flat and elongated. They are mostly dark brown in colour with yellow-fawn shoulders, and legs.

European earwigs are winged (although they rarely fly) – they have one pair of short yellow-fawn hardened forewings and second pair of soft membranous hindwings which are not visible.

Like all earwigs, they have thin, segmented antennae, and a pair of pincers at the rear of their body. Males have longer curved pincers, whereas females have straight pincers.

Nymphs are similar to adults in appearance, except they are smaller, paler, and their wings are not fully developed.

In Australian cropping environments, mating occurs during late summer and early autumn, and as temperatures decline from March to May, female earwigs appear to enter paddocks and disperse to create nests under soil clods, sometimes assisted by a male.

The main brood of eggs is laid (20 to 80 white oval eggs) from May, at which time the male (if present) is aggressively forced to leave the nest by the female (so that he doesn’t cannibalise the brood). A second brood of eggs may be laid after this, potentially as late as October. This brood is generally made up of much fewer eggs than the first.

The eggs hatch in ~4-6 weeks and nymphs go through four instars, each taking ~4-6 weeks. The first and second instars do not leave the nests until around August. Adult and nymphs peak around October/November depending on region and year. European earwig development is highly temperature dependant, and so the time to reach each instar will be shorter when exposed to warmer microclimates (i.e. soil temperature).3

As crops senesce and are harvested, the European earwig appears to move from paddocks to neighbouring landscapes with diverse vegetation. The following year, they re-enter paddocks during early autumn.

The European earwig is an omnivore and is extremely polyphagous, eating a range of both living and dead plant and animal material.4

While commonly regarded as a crop pest in Australia, overseas the European earwig is often considered a beneficial natural enemy of agricultural pests, such as aphids and caterpillars, particularly in fruit orchards and vineyards.5-7

The European earwig is a social insect, aggregating in clusters and nests.8 In paddocks, they are often patchily distributed and found under soil clods, rocks and debris.

As a nocturnal species, during the day adults and nymphs seek shelter in dark locations.

Adult females provide maternal care for their nymphs by providing food, shelter and protecting them against predators.9

The European earwig defends itself with its pincers and also by secreting a bad-smelling substance, which has microbial, nematocidal, and fungicidal properties.10

The European earwig can be confused with other earwigs, including a beneficial native earwig, the common brown earwig (Labidura truncata).

The common brown earwig preys on soft-bodied insects including moth larvae and pupae in broadacre crops.11 It can be distinguished from European earwigs by the orange triangle present on its back, and its relatively non-gregarious behaviour.8

The European earwig can attack a wide range of broadacre, horticultural and ornamental plants. Canola, lucerne and some legumes are some of the more susceptible broadacre crops; cereals and chickpeas are less susceptible but can still incur some feeding damage.

The European earwig feed on leaves and stems, and on germinating seed. In Australia, broadacre winter crops are most vulnerable to feeding damage during establishment.

In severe infestations, young plants can be defoliated or chewed down to ground level.

It is difficult to distinguish European earwig feeding damage from slug, snail, slater and millipede damage.

Crops should be monitored for the presence of European earwigs before and after sowing.

As a nocturnal species, European earwigs are most likely to be seen at night with a torch. If searching during the day, check under soil clumps, stubble residue, rocks and wood.

Shelter traps such as carpet squares, tiles or cardboard rolls, create a favorable habitat, and can be used to lure and detect earwigs.

Pitfall traps can also be used to detect earwig movement and presence.

Economic thresholds have not been developed for the European earwig.

There are no known natural enemies which can effectively control the European earwig in Australia.

Vertebrates such as birds and lizards will feed on earwigs, and European earwigs are also cannibalistic, however this is unlikely to provide sufficient population reduction.

Some studies show that soil tillage can reduce earwig numbers.5,13

As European earwigs typically construct their nests under soil clods and seek shelter during the day, tillage and farming practices which disturb soil and reduce stubble loads, may help to reduce breeding sites and suppress populations.

If there are particular paddocks where European earwigs are routinely problematic, growers may wish to try sowing a higher seeding rate or a high vigour variety to compensate for damage and/or earlier sowing to help plants establish rapidly and outgrow invertebrate damage.

Chemical options for control of European earwigs are very limited.

There are no registered chemical sprays in broadacre crops. Broadspectrum bare-earth and foliar insecticides applied to control other establishments may not impact European earwigs as they seek shelter during the day.

This article was compiled by Julia Severi (cesar). Thanks to Dr Matthew Binns (CSIRO) and Thomas Heddle (SARDI) for their technical contributions and reviews.

8 Sauphanor B and Sureau F, Aggregation behaviour and interspecific relationships in Dermaptera, Oecologia 96:360–364 (1993).

13 Sharley DJ, Hoffmann AA, and Thomson LJ, The effects of soil tillage on beneficial invertebrates within the vineyard, Agric For Entomol 10:233–243 (2008).