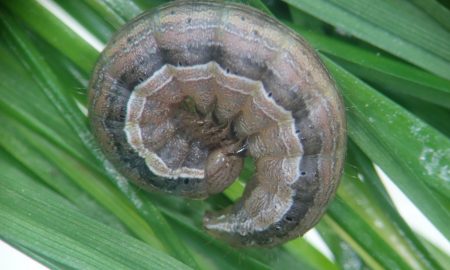 Armyworms are common caterpillar pests mostly of grass pastures, cereal and rice crops. The larvae are identifiable by three parallel white stripes along their body. They cause most damage to crops through defoliation in autumn and winter, but can also cause direct seed loss in spring (particularly in barley and oats) and summer (rice) through stem, spikelet and head-lopping. In the uncommon event of extreme food depletion and crowding, they will ‘march’ out of crops and pastures in plague proportions in search of food, which gives them the name ‘armyworm’.

These are native pests. Common armyworm (Mythimna convecta) is found in all states of Australia and potentially will invade all major broadacre-cropping regions year round, but particularly spring and summer. The Persectania species are more typically found in southern regions of Australian autumn and winter, but their activity can sometimes extend into spring.

The three armyworm species commonly found in southern Australia are the common, southern and inland armyworms. Note that the common armyworm, Leucania convecta, was formally known as Mythimna convecta. They are difficult to distinguish apart, however, correct species identification in the field is generally not critical because their habits, type of damage and control are similar.

Adult moths are grey-brown in colour and have a stout body with a wingspan of approximately 40-45 mm. The common armyworm migrates into south-eastern Australian cropping areas in late winter or early spring laying eggs in cereals, rice and pastures. Southern and inland armyworms, which are also migratory, are most commonly found in autumn and winter, often in relatively high densities. They can also be found damaging crops during spring in cooler regions. All armyworms lay eggs in dry grass and stubble from previous cereal crops or pasture.

Armyworms are identifiable by three parallel white stripes along their body

Armyworm eggs are laid in batches of about 5-30, glued together in the hidden, twisted crevices of standing dried grasses, straw and stubble or sometimes in seed heads. In spring, the common armyworm will also lay in the crevices between the ligules of lower senescing leaves and stem. The eggs may take 6-20 days to hatch, depending on local temperatures. The young larvae, which are approximately 2-3 mm in length, may disperse away from the egg laying sites on fine silken threads. These are used to allow wind dispersal within a few metres of the egg-laying site.

There are six or sometimes seven stages (instars) of caterpillar growth, and the skin is shed after each. Development is faster at higher temperatures; common armyworm develops faster than southern armyworm.

Older caterpillars crawl around at night and may move up and down plants regularly. They spend the day curled up at the base of the plant under clods of soil or in the plant crown. The majority of plant damage is caused by the final larval stages.

The mature caterpillars pupate in the surface of the soil at the base of the plant. The adult moth finally emerges at least four to six weeks (possibly many more) after pupation, and migrates away from the region.

Armyworms almost always fly into crops following short to long distance migrations. After eggs hatch, they mostly feed on leaves, but under certain circumstances will feed on the seed stem, resulting in head or panicle loss. The change in feeding habit is caused by depletion of green leaf material or crowding. In the unusual event of extreme food depletion and crowding, they will ‘march’ out of crops and pastures in search of food, which gives them the name ‘armyworm’. In this state, the caterpillars become distinctively darker and will march during the day.

Adult moths are most active on warm humid evenings during spring and autumn.

Larvae are similar to native budworm (more prominent body hairs) and cutworms (stripes absent or indistinct). They can also be confused with other species of armyworm that are more prominent in northern Australia including the day feeding armyworm (and other Spodoptera spp.), and other grass feeding noctuids such as species of Proteuxoa and Dasygaster spp. (herringbone caterpillars).

Barley, oats and rice are most susceptible to economic damage, but armyworms are also commonly found in wheat, triticale and grass pastures where extreme defoliation or head loss occasionally occurs. These species generally do not damage oilseeds and grain legumes, although limited defoliation of lentils (removal of lower branchlets) has been observed. Autumn and winter infestations are almost always associated with crops sown into standing stubble, providing a medium upon which moths lay their eggs.

There are two periods of armyworm damage: late autumn and winter (low to moderate economic damage) and late spring (high risk of seed loss in maturing crops). Armyworm larvae feed on the leaf margins of seedling and vegetative crops causing ‘scalloping’. Larger larvae consume greater volumes of leaves, and seedlings and early vegetative crops may be completely defoliated. However, in late spring barley crops are most susceptible to damage when they are attacked near maturity. Similarly, rice is most susceptible in the later stages of crop growth when spikelets within the panicles are severed in summer. The larger larvae, which may have been in the crop for 6-8 weeks, chew through the stem just below the head (the last green material left on the plant) causing heads to be lopped and fall to the ground. Wheat and triticale have thicker stems and are less susceptible to head loss.

Damaging infestations in autumn and winter are almost always associated with crops sown into standing stubble, providing a medium upon which moths lay their eggs.

Early in the season, monitor crops sown into standing stubble, as this is commonly where armyworm damage will appear first.

When cereals, pasture seed crops and rice are approaching ripening, early detection of armyworm is important. The most critical time is 3-4 weeks prior to harvest, although crops should also be monitored during tillering. Assessing the numbers of armyworms can be difficult because their movements vary with weather conditions and feeding preferences. Larvae are most active at night, although can sometimes be seen during the day feeding on leaves and stems of crops. Look for signs of caterpillar droppings (frass) and damage to plant heads. Look for caterpillars on plants and on the ground, especially under leaf litter between the rows. Check frequently for signs of head-lopping in barley, oats and rice.

There are several techniques for monitoring armyworm, each demonstrated here by a short video: a) use of a sweep net in a crop, particularly in the early evening, provides an indication of the relative densities and stages of armyworm; b) A beatsheet sampling provides a better absolute measure; and c) ground searching. Although more time consuming, ground searches provide the best indication of the imminent damage potential of large larvae.

Early monitoring of pre-ripening crops can save considerable crop loss

For winter outbreaks (during tillering), economic thresholds of 8 to 10 larvae per m2 provide a guide for spray decisions. For spring outbreaks (during crop ripening) spraying is recommended when the density of larvae exceeds 1 to 3 larvae per m2 although this figure must be interpreted in light of timing of harvest, green matter available in the crop, expected return on the crop, and larval development stage (McDonald 1995). In rice, recommended thresholds are 8, 12 and 16 larvae per m2 for pre-panicle formation, >2 weeks before harvest, and <2 weeks before harvest, respectively (Stevens 2013).

There are several insecticides registered against armyworms in broadacre crops. See the APVMA website for current chemical options. The biological insecticide Bacillus thuringiensis (Bt) is effective on armyworms and is also ‘soft’ on natural enemies. Spray Bt late in the day/evening to minimise UV breakdown of the product, and ensure the insecticide is sprayed out within 2 hours of mixing. Make sure the appropriate strain is used for the target pest, add a wetting agent and use high water volumes to ensure good coverage on leaf surfaces. When insecticides are required, it is recommended that applications be carried out in the late afternoon or early evening.

Biological insecticides are effective on armyworms; application should be carried out in the later afternoon or early evening.

McDonald G and Smith AM. 1986. The incidence and distribution of the armyworms Mythimna convecta (walker) and Persectania spp. (Lepidoptera: Noctuidae) and their parasitoids in major agricultural districts of Victoria, southeastern Australia. Bulletin of Entomological Research 76: 199-210.

McDonald G, Bryceson KP and Farrow RA. 1990. The development of the 1983 outbreak of the common armyworm, Mythimna convecta, in Eastern Australia. Journal of Applied Ecology 27: 1001-1019.