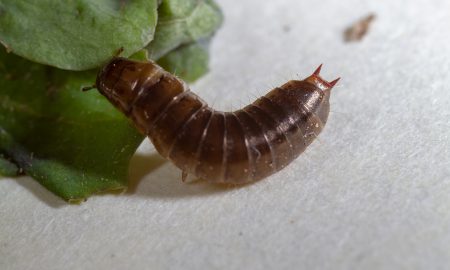 Bronzed field beetles damage plants by chewing on seedlings at or above ground level. In Western Australia and South Australia bronzed field beetles are abundant and often cause economic damage to canola. Like other false wireworm species, larvae have cylindrical elongated bodies and attack canola above the ground and at the base of plants. Adult beetles are shiny black with a slight bronzed appearance.

Bronzed field beetle larvae may feed on roots and underground stems of plants. They are most destructive when they have reached half their body size. Damage is most severe where crop growth is slowed by dry or cool conditions.

Adult bronzed field beetles grow up to 11 mm in length and are shiny black in colour, with a slight bronze appearance. Larvae are dark brown with short legs and grow up to 12 mm long and 3 mm wide. They have cylindrical elongated bodies with 12 body segments and 6 legs. The last segment has two distinct upturned spines on the end.

Bronzed field beetles generally have only one generation per year. Adults are flightless and emerge from pupation in the soil late in spring, then shelter in crop residues during summer and autumn. They become active after autumn rain and lay eggs anytime between March and May depending on moisture availability. Eggs are laid just below the soil surface mostly in stubble or crop litter. Larvae emerge in late autumn and are active during winter and early spring before pupating sometime between late August and October.

The shiny, dark brown bronzed field beetle larvae live in the soil. Where soil is moist the larvae aggregate in the top 10-20 mm of litter. As soil dries, the larvae move deeper, coming to the surface to feed at night when dew moistens the soil. Adults shelter in crop residues during summer and autumn, becoming active after autumn rains.

Adults are similar to other false wireworms, including the vegetable beetle and the eastern false wireworm. Adults may also be confused for carabid beetles. Larvae resemble grey false wireworm larvae, which are a similar size and also have two upturned spines on the final abdominal segment.

Bronzed field beetles (adults) damage plants by chewing on seedlings at or above ground level. Larvae may also feed on roots and underground stems of plants, however, they may also be present in the soil with little or no damage to plant seedlings. This is because they primarily feed on dead organic matter and high numbers are required to cause serious crop damage. They can cause significant damage to canola by eating seed, or feeding on underground parts of seedlings and chewing through stems at ground level. Plant stems become weak and young seedlings often die, causing bare areas or thinning within a crop. Larvae are most destructive when they have reached half their body size and damage is most severe where crop growth is slowed by dry or cool conditions.

After a new generation of adults emerges in spring, beetles may climb maturing plants and contaminate grain at harvest.

Adults can be also become stored grain contaminants of barley and canola.

Paddocks containing high amounts of crop stubble or heavy pasture growth should be checked for the presence of adults before sowing canola. Artificial refuges such as terracotta tiles or carpet squares can be employed to estimate the presence of bronzed field beetles before sowing. Place artificial refuges in areas of high stubble or where previous damage has occurred. Leave these refuges in the paddock for several days before checking and counting the number of adult beetles present underneath.

It is important to monitor crops after sowing through to establishment. Larvae are typically found within the top 1 cm of the soil and can be found under plant material, clods of soil, rocks or wood. They may be difficult to find during the day, although their shiny, reflective bodies can sometimes be seen in the sun. If damage is observed, monitor the crop at night when larvae are most active and feeding at the base of plants.

Control should be considered when five or more adult beetles are found per m2 (Bailey 2007). Fifteen adult beetles in 1 m2 can potentially produce over 1500 larvae, and this amount is likely to damage most canola crops at the seedling stage (Michael et al. 2002).

Carabid beetles are known predators of soil-dwelling insects including false wireworm larvae. However, they are usually not present in high enough numbers to effectively control large pest populations. Other natural enemies include spiders, native earwigs and other predatory beetles. Fungal diseases caused by Metarhizium anisopliae and Beauveria bassiana can attack false wireworm populations but their effectiveness in the field is not fully understood (Allsopp 1980).

Stubble retention and minimum tillage contribute to the build-up of bronzed field beetle populations. Removal of trash in spring is an effective management strategy to reduce the summer carry-over of beetles into autumn. Methods of stubble removal may include cutting, baling, grazing or burning. Cultivation before seeding may reduce the survival rate of larvae. Increase the seeding rate if sowing into a paddock known to contain bronzed field beetles. Consider sowing a cereal or pulse crop if high populations of this pest are present.

Removal of trash in spring is an effective management strategy