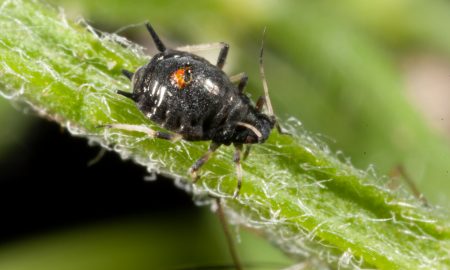 Cowpea aphids are shiny black with white and black legs. This species is found in medics, vetch and a wide range of summer and winter pulse crops throughout Australia. In autumn, the aphids appear to be able to move large distances to colonise establishing crops and pastures. Cowpea aphids are known to transmit several plant viruses that can contribute to yield losses, including cucumber mosaic virus, bean yellow mosaic virus, alfalfa mosaic virus and pea seed-borne mosaic virus.

The cowpea aphid is a widespread and relatively common pest of legume crops throughout Australia. They have a wide range of host plants and can tolerate warm, dry weather conditions that cause many other aphid species to suffer.

Adult cowpea aphids are shiny black in colour and nymphs are dull grey. All stages have white and black legs. Nymphs are lightly dusted with wax. When fully grown adults are approximately 2 mm long.

Winged aphids fly into crops from legume and non-legume hosts, and colonies of aphids start to build up within the crop. Aphids can reproduce both asexually and sexually however in Australia, the sexual phase is often lost.

Cowpea aphids are capable of being transported (migrating on the wind) large distances from more favourable hosts, particularly during autumn. They tend to colonise single plants before moving onto surrounding plants to form groups of plants in ‘hot spots’ within a crop.

Aphids can cause direct feeding damage to plants when in large numbers as they remove sap, which can cause wilting of plants. Cowpea aphids also inject toxins into the plant while feeding. Cowpea aphids form dense colonies on individual plants, with infestations usually starting on the growing tips and spreading down the stem. Initial signs of damage include yellowing or whitening of leaf veins, with heavy colonisation causing rapid wilting of leaves and eventually plant death. Other symptoms include leaf bunching and stem twisting. Secretion of honeydew by aphids can cause secondary fungal growth, which inhibits photosynthesis and can decrease plant growth.

In pulse crops, aphid feeding damage (in the absence of virus infection) can result in yield losses of up to 90% in susceptible varieties, and up to 30% in varieties with intermediate resistance.

Cowpea aphids are most prominent in spring, but are also active during autumn and persist through winter. Regularly monitor vulnerable crops during bud formation to late flowering.

Control summer and autumn weeds in and around crops, particularly legumes, to reduce the availability of alternate hosts between growing seasons.

Sow crops early to enable plants to begin flowering before aphid numbers peak in spring and use a high sowing rate to achieve a dense crop canopy, which will assist in deterring aphid landings. Select cultivars that are less susceptible to aphid feeding damage.

The use of insecticide seed treatments can delay aphid colonisation and reduce early infestation and aphid feeding.

A border spray in autumn/early winter, when aphids begin to move into crops, may provide sufficient control without the need to spray the entire paddock. Avoid the use of broad-spectrum `insurance` sprays and apply insecticides only after monitoring and distinguishing between aphid species. Consider the populations of beneficial insects before making a decision to spray, particularly in spring when these natural enemies can play a very important role in suppressing aphid populations if left untouched.

Gutierrez AP, Nix HA, Havenstein DE and Moore PA. 1974. The Ecology of Aphis craccivora Koch and Subterranean Clover Stunt Virus in South-East Australia. III. A Regional Perspective of the Phenology and Migration of the Cowpea Aphid. Journal of Applied Ecology 11: 21-35.