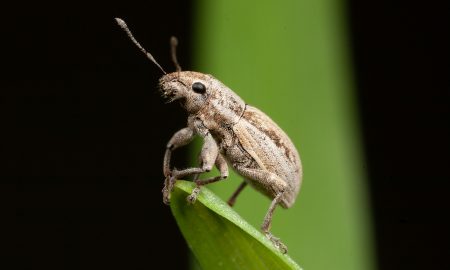 Adults are large flightless weevils with a lighter coloured stripe along the side of the body. Larvae feed on roots, mostly of legumes, and are generally more damaging than adults. Larvae are extremely difficult to control. The rotation of cereals or grass pastures after a heavy infestation will reduce populations dramatically.

This weevil is a native of South America. A major pest in Queensland and Western Australia, but also found in New South Wales, Victoria and South Australia where they are more sporadic, and problems are generally quite localised. Whitefringed weevils are often patchily distributed within paddocks.

Larvae grow up to 13 mm long and creamy yellowish-white to grey in colour with a brown head tucked back into the thorax and black mouthparts. They are legless and have two sub lateral longitudinal grooves along the length of the body. They are soil dwelling, legless grubs and have a slightly curved body.

Adults are large weevils, growing to 10-13 mm long. They are light to dark grey or brown with distinct hairs. They have a lighter band along the outer margins of the wing covers, with two paler longitudinal lines on each side of the thorax and head, one above and one below the eye. They have a short broad snout. This species was previously known as Graphognathus leucoloma.

There is generally one generation per year although this can extend over two seasons. Females reproduce without mating (pathogenic) which increases this weevil’s pest potential. Adults lay eggs in the soil, on plant roots, plant stems or in plant litter during summer and autumn. The eggs are found in clumps stuck together by a sticky substance that also adheres to soil making them difficult to find. This sticky material hardens into a protective film, slowing desiccation and possibly aids drought survival. Egg clumps contain from 12-60 eggs. Eggs are predominantly laid and hatch during autumn after which large numbers of non-feeding first-instar larvae appear. First instar larvae persist throughout winter but develop more quickly in spring before pupating in late spring or early summer. There are eleven larval instars and development takes from 8 to 20 months depending on temperature. Young adults emerge from the soil and are active from summer until early winter.

Larvae are soil dwelling and become root feeders from the second instar. In established plants, they burrow into or along taproots up to 20 cm below the soil surface and this makes the larvae extremely difficult to control. Adults cannot fly and emerge from soil in summer, dispersing by walking or by being carried in hay or transported on agricultural machinery. Adults usually feed at night although can be seen active on sunny days. As eggs can be laid on many parts of a plant, they can be dispersed with distributed plant material.

A wide host range, but mostly legumes including lucerne, clovers, medics, beans, chickpeas. Maize has also been reported to be damaged.

Damage occurs from autumn to spring and is often worse when two susceptible crops are grown in sequence. Larvae feed on plant roots (lateral and taproots), causing seedlings to show stress, and in severe cases, die. Established plants can become stunted or show reduced vigour. Adult weevils feed on leaves, making scalloped markings, but this damage is often less severe compared with larval feeding damage to roots. Root feeding by larvae on establishing lucerne in its first season may damage or even kill plants and result in the necessity to re-sow. In some years, larvae can spend up to two years feeding on roots, causing extended feeding pressure on perennial plants. Infestations often occur in patches.

It is larger over-summering larvae (that hatched in the previous autumn) that impose most feeding pressure on emerging crops in autumn.

Monitor young seedling crops during autumn and winter by looking for leaf damage. If seedling death occurs, dig soil in affected areas to approximately 30 cm and look for larvae under plants in the soil or within the roots. Pre-sowing examination of the roots and soil surrounding tap-rooted plants and legumes should be considered in autumn or spring. Pitfall traps can be used to trap adult weevils that move around on the soil surface.

It is better to monitor for adults earlier in the year, controlling if necessary, than attempting to control larvae later in the year.

There are no economic thresholds available for whitefringed weevils, however, control methods should be considered if significant adult activity is observed in seedling crops.

Parasitism of whitefringed weevils by a parasitic nematode, Heterohabditis spp., has been reported in Australia, however the extent of this control is unclear.

Avoid planting susceptible crops, including lucerne and medics, directly in or near paddocks where weevils have been problematic in the previous year. Crop rotations can be used to reduce infestation levels by sowing infested areas to cereals or grass pastures. Cultivating paddocks in September and October will reduce populations of mature larvae and pupae.

There are no insecticides registered against whitefringed weevils in broadacre crops. Insecticides applied to control other pests may have some impact on adults but will be ineffective against larvae due their subterranean habits.

Sexton SB and Williams P. 1981. A natural occurrence of parasitism of Graphognathus leucoloma (Boheman) by the nematode Heterorhabditis sp. Journal of the Australian Entomological Society 20, 253-255.