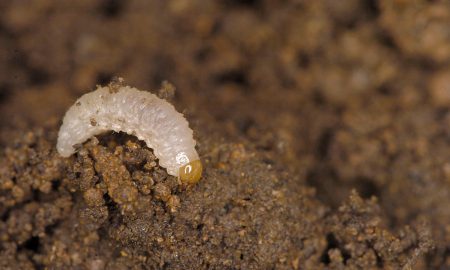 Also known as desiantha weevils, spotted vegetable weevils are medium sized weevils that attack cereals and canola in eastern and southern Australia. Adults are mottled grey-black in colour. Larvae are white legless grubs with a brown head and spend their life underground. Crop rotations away from grass-based pastures will reduce populations, and seed treatments will reduce larval damage to cereals.

The spotted vegetable weevil is a sporadic pest that is native to Australia and widely distributed. They are present in Queensland, New South Wales, Victoria, Tasmania, South Australia and Western Australia.

Adults are mottled grey-black weevils with grey flecks on the abdomen and the typical elongated weevil snout. They grow up to 7 mm long and are flightless. Larvae are white, legless grubs with orange-brown heads and grow to 8 mm in length. This species was previously Desiantha maculata.

Adults lay eggs in soil that hatch in autumn after opening rains. In spring larvae pupate and adults emerge during spring through to early summer. They have one generation per year.

As larvae are legless, they are restricted in their movements. Spotted vegetable weevil larvae are confined to living underground. They feed on germinating cereal or grass seed or the stem of emerging plants. Adults chew on cotyledons, leaves and stems and are most active at night.

Paddocks that were in pasture with abundant capeweed the previous season are at highest risk.

Larvae attack cereals at the seedling and tillering stages. They feed underground on germinating seeds, and bore into the stems of seedlings and tillers, often killing plants or resulting in abnormal and stunted growth. In contrast, canola is mostly damaged by adults. They chew cotyledons, leaves and stems of canola plants and may eat small plants down to ground level.

This weevil can damage successive crops.

Crops that follow a long-term pasture are most likely to be at risk. Inspect newly sown paddocks and germinating seedling crops, looking for poor emergence or bare patches. In cereals, search for the presence of larvae by digging in the soil. Search an area of 30 cm x 30 cm square and to a depth of 10 cm. Repeat this 5 to 10 times across the paddock. In canola, monitor emerging crops for damage and weevils using direct visual searches. Searches may need to be undertaken during the night, as this is when spotted vegetable weevils are most active. Pitfall traps are also a very effective technique to assess the abundance of weevils. Inspect entire paddocks as spotted vegetable weevils are often distributed across the entire paddock.

There are no known predators, parasites or pathogens that effectively control spotted vegetable weevil.

Avoid sowing susceptible crops into long-term pasture paddocks. Crop rotations that include only one year, or at most two years, of pasture between cereal crops will reduce pest occurrence. Control alternate hosts, including grass weeds, during late spring, summer and early autumn to reduce the survival rate of adults and minimise egg numbers.

Grimm M and Michael P. 1989. Desiantha: a pest of germinating crops on the south coast. Farmnote 76. Department of Agriculture, Perth.