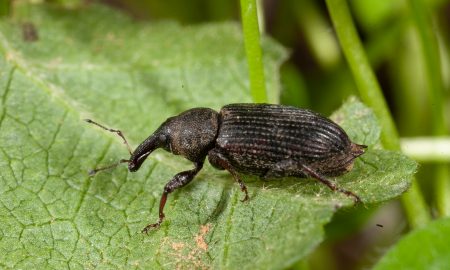 Spinetailed weevils are medium sized weevils that attack germinating and seedling cereals. Larvae are white legless grubs with a yellow head. Adults are similar to spotted vegetable weevils. Dispersal is very slow so it takes a number of years in a pasture phase before enough weevils accumulate to cause crop damage.

The spinetailed weevil (sometimes referred to as ‘cereal curculio’) is a widely distributed insect native to parts of Australia. It is found in South Australia, Victoria and New South Wales.

Spinetailed weevil occurrence as an agricultural pest is relatively rare. It became a pest when tillage practices changed during the 1950s from long-term spring-prepared fallows to short-term autumn prepared fallows.

Adults are greyish-black in colour, have a typical weevil-like snout and grow up to 7 mm long. The wing covers of the females are tapered at the ends to form two spines. Males lack these spines and are usually slightly smaller than females. Adults are unable to fly. Larvae are white, legless grubs with a yellow head capsule and grow up to 8 mm long.

Spinetailed weevils have one generation per year. Sexually immature adults emerge from the soil in November. Autumn rain stimulates summer sheltering adults to become active and mate. Because adults are flightless they lay eggs in the soil close to where they emerge. Eggs hatch after 2-3 weeks in autumn after the opening rains. Larvae pass through five instar stages and pupate in spring and adults emerge during spring through to early summer.

After emergence in November, adults feed on early summer annual weeds before sheltering under stones or soil clods during summer. Rains in autumn cause resumption of feeding and mating. After hatching, larvae feed on germinating grasses or cereals and can also feed on soil organic matter. Larvae feed during winter and spring.

The larvae of spinetailed weevil can only be distinguished from spotted vegetable weevil by examining the spiracles under a microscope.

Larvae attack cereals at the seed, seedling and tillering stages. They may feed underground on germinating seeds just after sowing, or bore into underground stems of seedlings, causing them to wither and die, or bore into the base of tillers. Seed or seedling death results in thinned or bare patches in crops. Damage is most severe in cereal crops sown after 3 or more years of grass dominant pastures.

Cereals are most susceptible when sown into paddocks that have not been cropped for a number of years. Inspect these paddocks prior to sowing and look for poor emergence and bare patches after sowing in late autumn/early winter. If poor establishment has occurred, search for the presence of larvae by digging the soil. Search an area of 30 cm x 30 cm square and to a depth of 10 cm. Repeat this 5 to 10 times across the paddock.

Treatment should be considered if there are 10 or more larvae per square metre (Bailey 2007).

Soil dwelling pathogens such as the fungus Beauvaria may kill some larvae. There are no known predators that effectively control spinetailed weevils.

Crop rotations that include only one or, at the most, two years of pasture between cereal crops will reduce pest occurrence. Use higher sowing rates to compensate for larvae attack on seed (see chemical option for more detail). Control alternate hosts, including grass weeds and capeweed, during late spring, summer and early autumn to reduce the survival rate of adults and minimise egg numbers.

There are no foliar insecticides registered against this species, however chlorpyrifos is registered as an insecticide seed dressing against the spinetailed weevil. Seed treatments can reduce the feeding damage to cereal seedlings however there may still be some plant death before the larvae are killed. If there are more than 100 larvae per m2, use a sowing rate of 95 kg/ha to compensate for the damage caused before the larvae are killed.

Control of larvae can only be achieved with a seed dressing