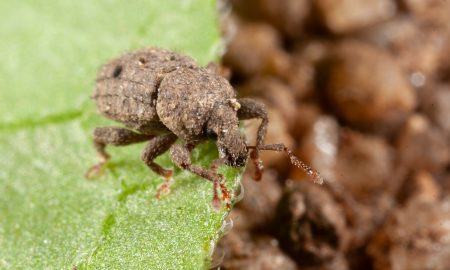 Mandalotus is a large genus of small, cryptic, native Australian weevils. At least ten species attack germinating canola crops in parts of south-eastern Australia. They occur mainly in areas with lighter soil types and are particularly common in Mallee regions. Weevil populations often recur within the same areas of paddocks across seasons. For these pests, understanding historical problem areas/paddocks, monitoring of emerging canola crops and early detection of weevil damage are critical to prevent crop losses.

Mandalotus weevils occur in parts of South Australia, Victoria and southern New South Wales, but are not recorded from Western Australia. They are found primarily on ‘rubbly’ or lighter calcareous soil types and are most commonly reported in Mallee regions. Mandalotus weevil populations are resident within paddocks and may recur in the same areas across seasons. The pest status of Mandalotus weevils in broad-acre crops has increased since the late 1990s, coincident with a dramatic expansion in canola production. The genus Mandalotus currently contains approximately 163 described species and a large number of undescribed species. At least ten species are known to damage to crops in south-eastern Australia.

At least ten Mandalotus weevil species are damaging to crops in southeastern Australia, and occur most commonly in areas with lighter soil types.

Mandalotus adults are small, flightless weevils approximately 3-5 mm in length. They are round and dull brown in appearance, often resembling a small clod of dirt. Adults of some species may be mottled in colour but colouration varies somewhat within and between species. The elytra (wing covers on back of the body) are typically covered with rows of short, stout, paddle-shaped bristles. The snout is relatively short and broad compared with several other pest weevils. Eggs are approximately 1 mm in diameter, whitish and ovoid in shape. Larvae are small, legless grubs, pale in colour with a hardened yellow-orange head capsule. Eggs and larvae are rarely seen in the field.

Mandalotus weevils have an annual lifecycle. Adults emerge onto the soil surface from mid-April onwards and begin feeding, mating and laying eggs. Females lay approximately 400 eggs during their lifetime and eggs hatch after 2-3 weeks.

Adults display cryptic behaviour, making detection and control difficult. They feed more actively at night, and during the day typically shelter in the top 1-2cm of soil at the base of plant stems. They are more surface-active in the several days following rainfall.

Adults of Mandalotus can be easily confused with those of several other pest weevils of a similar size class: spotted vegetable weevil (Steriphus diversipes), which is slightly larger and has a longer weevil snout; Polyphrades weevil (Polyphrades laetus), which is known to attack cereal crops on the Eyre Peninsula region of South Australia; Sitona weevil, which has a broad snout and three pale stripes on the thorax.

Canola crops are highly susceptible to damage during the first few weeks after emergence. Other crops, including cereals, medic pastures, lentils, vetch, peas, chickpeas and beans, are also chewed but usually this does not cause significant damage.

Mandalotus weevil populations often recur in the same areas of paddocks across seasons. Knowledge of paddock history can identify areas at higher risk. From late April, check under isolated weeds (i.e. those surrounded by bare soil) for adults sheltering in the soil at the base of plant stems. Check canola crops one week after emergence for evidence of weevils and missing or lopped seedlings. Monitoring at night with a torch can reveal adults feeding up on the foliage of seedlings.

There are no economic thresholds established for this pest. Accurately assessing Mandalotus numbers in a paddock is difficult due to their cryptic habits.

There are currently no known biological control agents for Mandalotus weevils.

Due to their largely subterranean life history and over-summering strategy, there are currently no cultural controls known to reliably reduce Mandalotus weevil populations within or between cropping seasons. But there is emerging evidence that that there may be some plausible options. For example, female egg production declines drastically in laboratory trials where females are continuously fed the foliage of crops other than canola, particularly cereals and some pulses (peas and chickpeas). Therefore, weed-free rotations with these crops could help reduce weevil populations in the following season. Increasing seeding rates and planting canola varieties with early vigour to aid rapid establishment may help reduce damage.

This article was compiled by Kym Perry (SARDI) and Bill Kimber (SARDI).