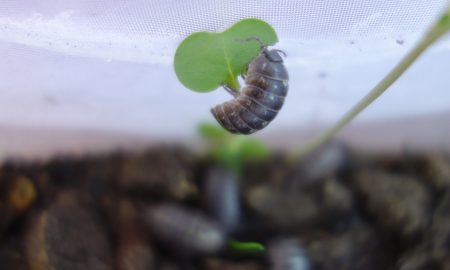 Slaters (also known as woodlice, sowbugs and pill bugs) are multi-legged, land-living crustaceans found all over Australia. They are scavengers and feed mainly on decaying organic matter and are usually considered beneficial. At high densities, they can damage crop seedlings. Slater numbers can be suppressed by reducing retained stubble.

The species of slaters found commonly in Australian crops and pastures are mostly introduced from Europe, although not all. It is only in relatively recent times that they have become a common pest in crops. In south-eastern Australia, damage has been reported in the medium and high rainfall zones including South Australia’s Mid North and Yorke Peninsula, Victoria’s Wimmera and Western Districts, and central New South Wales. In many cases – but not all – damage has been reported where there was an accumulation of stubble or other plant matter or cracked soils. Stubble provides a cool, moist habitat while crumbly clay soil surfaces and cracking clays aid their survival. A moist environment is critical to their survival.

At modest densities, slaters provide a useful role in helping to integrate stubble back into the soil.

Slaters are crustaceans related to the normally aquatic or marine crabs, lobsters and prawns but are adapted to living on land. Slaters are easily recognised by their heavily armoured, flattened bodies. They are oval, dull-grey and segmented, growing from 8-20 mm in length, depending on the species. They have 1 pair of prominent antennae, 1 pair of inconspicuous antennae and 7 pairs of legs (1 pair per segment).

There are three species of slaters found in broadacre situations, although they vary in their distribution. The common slater originally introduced from Europe, Porcellio scaber, is the most widespread species in Australia. This species is usually pale grey, although brown, yellow or orange variations are not uncommon, and can reach 20 mm in length. The Pill bug, Armadillidium vulgare, is also a European species and occurs commonly across Australia. It is characterised by its ability to roll into a ball when disturbed. It can grow to 18 mm and is dark brown to black in colour. The flood bug, Australiodillo bifrons, is a native slater that forms large swarms of tens of thousands of individuals. Flood bugs have recently been recorded attacking cereal crops. Populations of flood bugs have increased in parts of New South Wales particularly those areas that are prone to flooding. A. bifrons is about 7-8 mm long and 4 mm wide with an oval-shaped and flattened body, light brown colour with darker irregular spots, and has a dark brown stripe down the middle of its back. It is a species adapted to low-land swampy soil or marshy environments.

Female slaters keep their eggs in a pouch until the young hatch. Upon emerging from the brood pouch the young resemble adults but have only 6 body segments and 6 pairs of legs. Hatchlings then leave the parent and are completely independent. Slaters grow through a series of moults in which the outer rigid skeleton is shed, allowing growth to the next larger and finally adult stage. They will gain their last segment and seventh pair of legs at later moults. During moulting the slater is very vulnerable and must find shelter.

Slaters need damp conditions, and will die if exposed to open and dry situations. Because of this, they tend to be active at night when the risk of dehydration is low. They spend most time seeking refuge under stubble, clods or in deep soil cracks, where they feed on rotting vegetation.

Pill millipedes, as both have similar sizes and live in similar habitats. Pill millipedes can be distinguished from slaters on the basis of having two pairs of legs per body segment instead of one pair like the slaters.

Slaters are omnivores or scavengers and feed upon decaying vegetable matter and associated fungi and also on animal matter. They form an important link in the food chain by recycling dead and decaying matter. Slaters can cause significant feeding damage, particularly on canola seedlings, leading to seedling mortality and stunted plant growth. In south-eastern Australia, slaters have also caused damage to wheat, oats, lentils and pastures.

Although the reported incidence of slater damage to crops has grown in recent years, feeding damage on emerging crop seedlings is still relatively rare. When it does occur, slater feeding on plants results in an uneven rasping-type damage that can appear similar to slug and snail damage. They can chew the tops of emerging cotyledons or leaves of crop seedlings, leaving only the seedling stumps. Other damage includes ring-barking of stems and young branches. However, the presence of slaters in a paddock, even in high numbers, does not always mean crop damage will occur because the slaters will generally be feeding on decaying organic matter. It is not known what makes slaters suddenly shift from eating organic matter to seedlings.

Slaters are mostly active at night or under moist conditions. They cause most problems for emerging crop seedlings so inspect crops during this establishment phase. During the day, it is best to search under stubble residue, rocks, wood, or to dig up the soil with a spade.

There are no economic thresholds established for slaters.

There has been no research on natural enemies of slaters, although ground beetles (carabids) and some species of spiders are common predators in the United Kingdom.

Management options are limited after crop emergence so prevention is a key part of control.

Managing stubble is likely to be the most effective strategy to reduce slater numbers. Some growers have had success managing slaters ahead of canola rotations through burning crop residues.

Slater populations can be suppressed by reducing stubble loads, or disturbing stubble in summer, exposing insects to the hot soil.

There are no insecticides registered to control slaters in broadacre situations. Slaters are relatively unaffected by most foliar applications of synthetic pyrethroids and organophosphates to control other crop-establishment pests, even when applied at very high rates. Insecticides are probably ineffective because slaters hide under cover and thus avoid contact with insecticide sprays. There are chemical baits registered for use against slaters in horticulture, and there is evidence to suggest some success with chlorpyrifos baits in Western Australia.

This article was compiled by Sandra Hangartner and Garry McDonald (cesar).