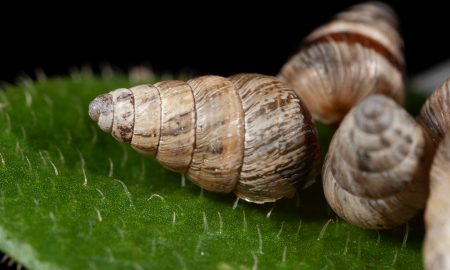 Small conical or small pointed snails feed on green plant and dead organic material and have been recorded as a pest of lucerne. They have caused problems in the South East of SA as a contaminant of grain and may feed on cereals, pulses and canola. During summer they can be found under stones and stumps, and on posts and vegetation, as well as in leaf litter on the soil surface or just below the surface.

Mostly recorded as a pasture pest in areas of >500 mm annual rainfall.

An introduced snail of European origin, the small conical or small pointed snail is found in Australia in South Australia, Victoria, New South Wales, Western Australia and Tasmania. In South Australia they are most abundant in areas of rainfall higher than 500 mm.

Small conical or small pointed snails are fawn, grey or brown in colour. At maturity the shell length is 8 to 10mm and the ratio of shell length to its diameter at the base is always 2 or less.

The lifecycle of snails is extremely dependent on and linked to behaviour and these should not be considered separately. Conical snails are hermaphrodites, thus each snail has both male and female reproductive organs. This gives every snail the potential to lay eggs after mating. Under optimal environmental conditions and food availability, each snail is capable of laying hundreds of eggs each season. However, the number of eggs laid is highly variable and dependent on the conditions prevalent in a particular season. Given optimal conditions, snail populations can increase rapidly. Commencement of egg laying is dependent on soil moisture content. Moisture, either from heavy dews or rainfall will trigger snails to become active and descend from over-summering (aestivation) sites on stubble, fence posts and vegetation to the soil. Small conical or small pointed snails also over-summer in leaf litter or just under the soil surface in soil cracks and clumps of grass, sealing their operculum to prevent moisture loss. Conical snails generally activate later in the autumn than round snails co-occurring in the same paddock. If cool conditions persist, snails may remain on the soil surface to feed. It appears that the first decent rainfall in autumn triggers mating. If the soil remains moist, egg laying commences, usually in April finishing in September but this timing varies between regions and seasons. No egg laying occurs during summer even with rain as the snails’ reproductive organs have not reached maturity at this time. Clusters of milky white eggs are laid in shallow holes in the soil. One snail can lay several clusters per season. Eggs hatch after about 2 weeks. Hatchlings are about 1 mm in size and are often found in groups. Small conical or small pointed snails can have an annual or a biennial lifecycle.

Small conical or small pointed snails feed on dead organic matter and green plant material, but have been recorded as a pest of lucerne. They may feed on cereals, pulses and canola, but its major pest status is as a contaminant at harvest of grain (cereals and canola) in higher rainfall districts of South Australia. The risk period is at crop germination and harvest.

These snails may defoliate cereals just after emergence. They can pass through harvesting machinery and contaminate grain. Contamination at certain levels can result in a downgrade to a lower classification or rejection by marketers.

Monitor for feeding activity prior to baiting early in the season. Concentrate on areas where limestone ridges occur close to the soil surface as these are areas where populations occur in greatest densities.

The importance of monitoring to determine feeding activity cannot be over emphasised.

The use of thresholds for snails is not relevant as good snail management requires population reduction at every opportunity.

A parasitic fly Sarcophaga pencillata which targets small conical or small pointed snails, was introduced into South Australia from Europe during 2001-3. To date there is no evidence to suggest this has had an impact on snail populations.

There are several cultural control options. These appear in detail Bash’Em Burn’Em Bait’Em – Integrated snail management in crops and pastures. In summary there are two approaches to cultural control.

• Bash’Em. As snails over-summer on any object above the soil surface to escape summer soil temperatures, stubble management by cabling, rolling or slashing is designed to bring the snails to the soil surface where they are desiccated and die. The higher the temperature when these processes are carried out, the more likely is it that snails will die. For effectiveness, air temperatures should be above 35°C.

• Burn’Em. This is the most effective method of snail control pre-breeding. An even burn is most effective. As snails are often beneath rocks, these should be turned before burning, and summer weeds should be browned-off. While burning stubble is seen as advantageous in destroying weed seeds, stubble-harboured diseases and snails, it is also detrimental in that it destroys beneficial soil organisms and reduces organic matter. Burn only when fire restrictions permit.

Snails have been found along all major transport routes between South and Western Australia, especially in camping grounds and at intersections along these roads. This suggests snails have become proficient hitch-hikers and are moving between regions on transport.

To avoid moving snails from infested to clean areas, farm machinery and produce such as hay should be inspected and if necessary cleaned of snails.

Commercial snail baits are available for snail control. Choice of bait is dependent on which products are registered for use in your state. Consult the product label. Label rates must be adhered to.

This article was compiled by Helen DeGraaf (SARDI) and Bill Kimber (SARDI).