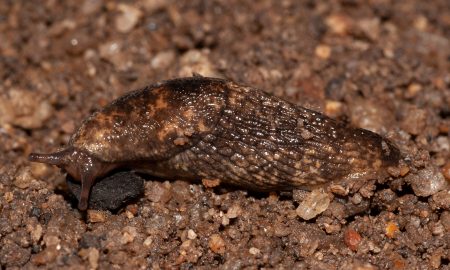 Grey field slugs are fawn to dark grey in colour with netted markings. Being responsive to moisture they may breed and be active at any time of the year if suitable conditions prevail. This species is a problem in the higher rainfall climates of southern Australia, in soils that crack and retain moisture. No single control option will work; effective control requires the use of cultural and chemical options, while also encouraging the activities of beneficial species.

Control of slugs is a numbers game; therefore a number of proactive strategies are required.

Soil that retains moisture, summer rains and reduced tillage are all factors that promote an increase of slug populations.

The grey field slug can grow up to 50 mm long and varies in colour from fawn to grey with netted dark brown markings, thus it is also known as the reticulated slug. A distinguishing feature is that they produce a milky coloured mucous when irritated.

The grey field slug is an opportunistic breeder at any time of the year if there is sufficient food, moisture and if temperatures are suitable, although they generally become very active after the autumn break. They can reproduce whenever temperature is between 4°C and 21°C (optimal temp is 16°C), and soil moisture is greater than 25%.

Slugs are hermaphroditic (having both male and female reproductive organs) and have the ability to delay mating and subsequent egg laying. Mating typically begins after germinating rains in mid autumn or early winter. Egg clusters are laid into the top layer of moist soil and hatch 3-5 weeks later depending on the temperature. The adult’s weight actually declines once egg laying commences. The optimal temperature for egg development is 10-16°C.

Juvenile slugs actively feed throughout winter and spring whenever moisture allows, becoming sexually mature after 5-6 months. Behaviour changes once individuals become adults. A number of egg batches are laid over a period of 4-6 weeks and feeding occurs between these events. Development and breeding can be delayed; hence spring juveniles survive over the dry summer in cracks in the soil. Eggs do not survive the summer. Moisture availability is a key regulator of slug populations. Although grey field slugs can have two generations per year in Australia, they are considered as having an annual lifecycle.

The grey field slug is predominately active on the surface at night, seeking moisture refuges in soil crevices, under rocks and dead plant material when the soil surface is dry. Removal or disruption of these habitats will delay and/or limit breeding.

These slugs generally become active after the autumn break, but they are opportunistic and may breed and be active at any time of the year if suitable conditions prevail.

The black keeled slug, the striped field slug and the brown field slug.

All crops and pastures. Canola is very susceptible to attack especially at the young seedling stage i.e. before six-leaf stage.

Crops are particularly vulnerable at establishment. Slug damage is usually patchy within a paddock. Irregular chewing marks on leaves and shredded leaf edges are typical damage symptoms. Grey field slugs will feed on seeds in open drill rows, hence rolling will improve crop establishment as it makes it harder for grey field slugs to find the seed. Once germinated, cereal crops are more likely to grow out of slug damage, however, loss of plant numbers may result in decreased yields. Canola and lupins will not compensate for damage to cotyledons, as this leads to plant death, but once plants are established past six leaf stage the plants have the capacity to compensate.

Monitor all paddocks in high rainfall areas with 500 mm rainfall, or that have received more than 500mm rainfall, especially in crops of late sown canola. The most important times to monitor is the previous spring to understand where problems might occur, and then again after rain prior to seeding. Slugs mainly feed at night so it is difficult to estimate numbers accurately. Traditionally, refuge traps such as terracotta tiles, carpet squares, flowerpot bases or even plastic drums have been used to monitor slug numbers. Traps should be placed on the soil surface when it is visibly wet, and then checked after a few days for the presence of slugs.

Growers often assess slug feeding activity by spreading bran based bait from corner to corner of paddocks after rain and check the following morning for dead slugs. Once the crop has been sown and germination has commenced, crops should be visually examined for damage and to ensure adequate rates of baits applied at sowing remain to protect seedlings. Damp and mild conditions are optimal for slug activity; hence the mornings after these conditions are the best for monitoring.

Refuge traps will be more reliable if used when the soil surface is obviously wet.

Despite being developed (Nash et al. 2007), thresholds are could be misleading because populations cannot be accurately estimated. Cereal seedlings are more tolerant than canola.

Carabid beetles are effective predators that can suppress populations, but will not stop damage to canola seedlings. Other generalist predators thought to reduce populations include spiders, earwigs, rove beetles and free-living flatworms.

Baits are a crop protectant and must be applied immediately after sowing and rolling, prior to crop emergence. Drilling of baits will only protect seed but not seedlings, hence a follow up surface application is recommended. Thirty (30) pellets per m² are needed to ensure adequate chance of encounter. There are several molluscicidal baits registered against slugs in broad-acre crops with guidelines for effective usage being updated regularly by SARDI. Be aware that some baits are far more stable than others under adverse weather conditions including cold temperatures and significant rainfall. Iron III and metaldehyde formulated baits are effective in providing seedling protection against slugs and have limited effects on natural enemies. Remember to check affected areas after baiting and be aware that re-baiting may be required under high slug infestations or split emergence of populations due to different species co-occurring in the same field.

Baiting at sowing is the best chemical option to protect your crop.

This article was compiled by Michael Nash (SARDI) and Bill Kimber (SARDI).