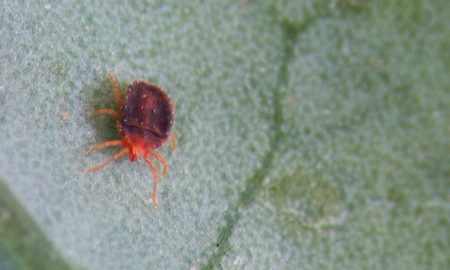 There are over 100 species of Bryobia mite worldwide, with at least seven found in Australian cropping environments. Unlike other broadacre mite species, which are typically active from autumn to spring, Bryobia mites prefer the warmer months of the year. Bryobia mites are smaller than other commonly occurring pest mites. They attack pastures and numerous winter crops earlier in the season.

Bryobia mites (sometimes referred to as clover mites) are sporadic pests typically found in warmer months of the year, from spring through to autumn. They are unlikely to be a problem over winter, however, they can persist throughout all months of the year. They are broadly distributed throughout most agricultural regions in southern Australia with a Mediterranean-type climate, including Western Australia, Victoria, New South Wales and South Australia. They have also been recorded in Tasmania and Queensland.

There are at least seven species of Bryobia mites found in broadacre crops in Australia. These appear very similar. Bryobia mites are smaller than other commonly occurring pest mites, although they reach no more than about 0.75 mm in length as adults. They have an oval shaped, dorsally flattened body that is dark grey, pale orange or olive in colour and have eight pale red/orange legs. The front pair of legs is much larger; approximately 1.5 times their body length.  If seen under a microscope, they have a sparsely distributed set of broad, spade-like hairs, appearing like white flecks (see Figure).

Accurate identification of mite species is important because management is species specific.

Bryobia mites can have several generations per year, with mites being most active during periods when temperatures are above 10°C. Overwintering eggs hatch in spring when conditions become warm and dry. Hatched nymphs are small with bright red bodies and pale orange-coloured legs. They look similar to Balaustium mite nymphs.

Bryobia mites are active during the warmer parts of the day and may be difficult to detect during the early morning or in wet conditions. They are often found feeding on the upper surface of cotyledons and plant leaves.

Bryobia mites have a preference for the broadleaf plants, such as canola, lupins, vetch, lucerne and clover, but will also attack cereals. In pastures, Bryobia mites tend to prefer clovers and medics to the grasses.

Bryobia mites tend to cause most damage in autumn where they attack newly establishing pastures and emerging crops, greatly reducing seedling survival and retarding development. They feed on the upper surfaces of leaves and cotyledons by piercing and sucking leaf material. This feeding causes distinctive trails of whitish-grey spots on leaves. Extensive feeding damage can lead to cotyledons shriveling. On grasses, Bryobia mite feeding can resemble that of redlegged earth mites.

Inspect paddocks during early autumn and spring when Bryobia mites are more problematic. Bryobia mites are difficult to detect during early mornings or in wet conditions and are most active during the warmer parts of the day. Look for mites and evidence of feeding damage on newly established crops, as well as clovers and brassica weeds prior to sowing. Unlike many other species of mites, which spend a lot of time on the soil surface, Bryobia mites are mostly found on the lower and upper leaf surfaces of plants. An effective way to sample mites is to use a standard petrol powered garden blower/vacuum machine. A fine sieve or stocking is placed over the end of the suction pipe to trap mites vacuumed from plants and the soil surface.

There are currently no known biological control agents for Bryobia mites in Australia.

Crops that follow pastures with a high clover content are most at risk. Avoid planting susceptible crops such as canola, lupins, vetch and lucerne into these paddocks. Early control of summer and autumn weeds within and around paddocks, especially broadleaf weeds such as capeweed and clovers, can help prevent mite outbreaks.

Bryobia mites have a natural tolerance to chemicals, and registered rates aimed at other crop mites might be ineffective.