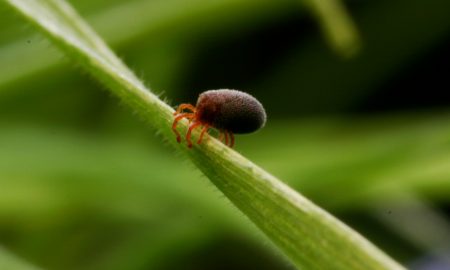 Balaustium mites are emerging as a significant crop pest in agricultural areas across southern Australia. They are the largest of the pest mites commonly found in broadacre crops. This species has a high natural tolerance to many insecticides and will generally survive applications aimed at other mite pests. Other strategies that are not reliant on chemicals, such as early control of summer weeds, should be considered.

Balaustium mites are broadly distributed across the southern coastal regions of Australia. They are sporadically found in areas with a Mediterranean climate in Victoria, New South Wales, South Australia and Western Australia. They have also been found in Tasmania although their exact distribution is unclear. Balaustium mites are typically active from March to November, although mites can persist on green feed during summer if available.

All mites are wingless and have four pairs of legs, no external segmentation of the abdomen and individuals appear as a single body mass.

Balaustium mites grow to 2 mm in length and have a rounded red-brown body with eight red-orange legs. They are easily distinguished from other crop mites as they are much larger in size. Adults are covered with short stout hairs and are slow moving. They have distinctive pad like structures on their forelegs. Newly hatched mites are bright orange with six legs and are only 0.2 mm in length.

Accurate identification of mite species is important because management is species specific.

Balaustium mites have at least two generations per season and do not require cold temperatures to stimulate egg hatching. Eggs will hatch as soon as there is sufficient moisture. Development from egg to adult is thought to take 5-6 weeks, although it can be longer. Recent molecular studies have shown that Balaustium mites reproduce asexually and males are quite rare.

Balaustium mites tend to feed singularly, compared to redlegged earth mites that generally feed in large groups of up to 30 individuals.

Adult Balaustium mites are approximately twice the size of adult redlegged earth mites and blue oat mites, and their body is larger and more rounded than Bryobia mites.

All crops and pasture can be attacked, but canola, lupins and cereals are the most susceptible crops, particularly at the seedling stage. Some broadleaf weeds such as capeweed are alternative host plants.

Balaustium mites attack all crops and pastures, but canola, lupins and cereals are the most susceptible crops, particularly at the seedling stage.

Balaustium mites feed on plants using their adapted mouthparts to probe the leaf tissue of plants and suck up sap. In most situations they cause little damage, however, when numbers are high and plants are already stressed due to other environmental conditions, significant damage to crops can occur. Under high infestations, seedlings or plants can wilt and die. Balaustium mites typically attack leaf edges and leaf tips of plants. In canola, damage is characterised by distorted cupped cotyledons, which may have a leathery appearance. In pulses and cereals Balaustium mites cause irregular white spotting or bleaching of the leaves. Under good growing conditions crops are often able to outgrow the damage. Recorded damage by these mites has markedly increased in the past decade.

Inspect susceptible pastures and crops from autumn to spring for the presence of mites and evidence of damage. It is important to inspect crops regularly in the first three to five weeks after emergence because seedlings are most susceptible to feeding damage. Crops sown into paddocks that were pasture the previous year should be regularly inspected. Balaustium mites can be difficult to find during dewy or wet conditions and are best detected during the warmer parts of the day. An effective way to sample mites is to use a standard petrol powered garden blower/vacuum machine. A fine sieve or stocking is placed over the end of the suction pipe to trap mites vacuumed from plants and the soil surface.

There are no known biological control agents for Balaustium mites.

Early control of summer weeds (especially capeweed and grasses), within and around paddocks, can help prevent mite outbreaks. Avoid volunteer grasses and broadleaf weeds within susceptible crops. Rotating crops or pastures with non-host crops can also reduce pest colonisation, reproduction and survival (e.g. prior to planting a susceptible crop like canola or a cereal, sow a broadleaf such as vetch).

This species has a high natural tolerance to many insecticides and will generally survive applications aimed at other mite pests. Pyrinex® Super is the only insecticide registered to control Balaustium mites in Australian broadacre, and is currently only registered against this species in canola crops.

Management strategies that are not reliant on chemicals should be considered for the control of Balaustium mites.

Arthur A, Weeks A, Hill M and Hoffmann A. 2010. The distribution, abundance and life cycle of the pest mites Balaustium medicagoense (Prostigmata: Erythraeidae) and Bryobia spp. (Prostigmata: Tetranychidae) in Australia. Australian Journal of Entomology 50: 22-26.