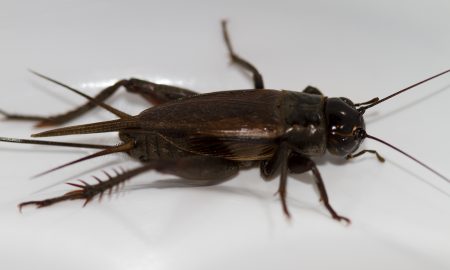 The black field cricket is widespread in Australia especially in soils with surface cracking or stony ground. They attack pastures, pasture seed crops, emerging cereal crops, many field crops including sunflower, soybean and most pulses. Significant damage can be caused, (usually after dark), by adults and nymphs feeding on leaves, stems and pods.

Control using insecticide treated grain is most successful when there are few alternative food sources.

Black field crickets are native to and widespread in Australia and commonly occur in regions where there is surface cracking or stony country. The species is found in New South Wales, Queensland, South Australia, Victoria and Tasmania.

Adults are black or brown, are up to 30 mm long, have long black antennae and mouthparts that are inclined downwards. The hind legs are large and modified for jumping like grasshoppers. Females have a long ovipositor projecting from their abdomen. Nymphs are similar but smaller and early nymphs have a white band across their body.

The lifecycle on pastures consists of two or three generations between spring and summer. Crickets overwinter as eggs in cold areas, and as both eggs and late stage nymphs in warmer areas. Adults mate at 2-3 weeks after maturity. Egg laying is stimulated by rainfall and warm conditions during spring, summer and autumn. White or yellow, banana shaped eggs are 2.5-3.0 mm long. They are deposited singly through the female’s long ovipositor generally 10-40 mm deep into the soil although sometimes directly onto the soil. This occurs late afternoon and evenings during cool and cloudy days. Nymphs can pass through 8-12 (usually 9-10) stages before becoming adults after 2-3 months. Young nymphs are white without wings or ovipositors and as they age become brown-black with a white stripe across their back. Later, wing buds develop and females form ovipositors. Females swarm during warm, humid evenings 1-2 days after rain and may fly up to 10 km to find egg laying sites. Population numbers are dependent on weather conditions: dry winters can desiccate overwintering eggs and nymphs, while cold wet weather during autumn, winter and spring can also cause high mortality.

Field crickets live in burrows and cracks in damp spots, especially in loam soils that tend to form deep cracks. When conditions are dry, crickets will burrow deep into the soil. After rain they move to the surface. Crickets can be found beneath loose soil and stones during the day. They emerge to feed at night. Adults and nymphs behave similarly.

Black field crickets are generally distinct and not confused with other insects.

Pastures, pasture seed crops, emerging cereal crops, and many other field crops such as sunflower, soybean and most pulses. Crops can be attacked at any stage with those in heavier soils at greatest risk. Most damage is caused by crickets already in the crop area or by adults flying into crops. Annual pastures are particularly vulnerable during late summer and autumn as they re-establish.

Significant damage can be caused by adults and nymphs feeding on leaves, stems and pods, usually after dark. When black field crickets are in plague numbers, seedling crops can be thinned to the extent that replanting is necessary. Above ground portions of seedlings disappear or are cut off at ground level. In sunflower, more mature plants may also be attacked damaging the back of heads and developing pods. At podding, pods of soybeans can be chewed by adults attempting to reach the seeds.

As crickets feed at night inspect crops at dusk when they are most active. Activity can be monitored with light traps. Establishing crops and pastures should be monitored in areas prone to attack by crickets. If germinating seed baits have been used, count the number of crickets at the baits.

The period of risk in field crops and pastures is generally during late summer and autumn, although damaging outbreaks may occur after spring showers, and pastures with a previous history of damage should be monitored during mid-summer. A shelter bag method of monitoring using at least 10 hessian or cloth bags placed over soil cracks 20 metres apart can be used in a paddock. Count the number of crickets beneath the bags a number of times each day. An alternative technique includes flushing. At 5-10 sites select a 20-30 cm crack. Flush crickets from the cracks using two litres of water with 20 ml detergent. Count the number of crickets emerging after 2-4 minutes. Calculate the average number of crickets.

Take action if significant damage is obvious, or the population of crickets is high. If using the shelter bag method of monitoring, an average of 5-7 crickets per bag, or one or more bags with 20 crickets may indicate need for control.

There appears to be no control of black field crickets from natural agents including diseases, parasitic insects, and insects, but if adults emerge from the soil after rain during autumn, spring and summer, they are exposed to predation by birds.

Weedy cultivation prior to planting may encourage crickets.

This article was compiled by Bill Kimber (SARDI).