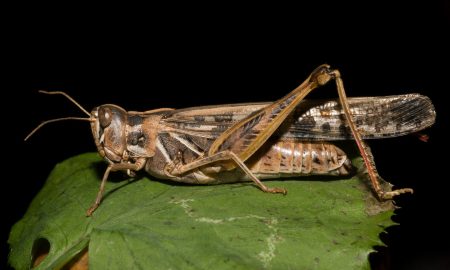 Native to Australia, occurring primarily in inland breeding areas including parts of Queensland, New South Wales, South Australia and Western Australia.  Adults are identifiable by a black spot on the tip of the hind wing. Outbreaks occur in some seasons when dense swarms of adult locusts can invade pastoral and cropping areas of southern Australia. Up-to-date advice can be obtained from the Australian Plague Locust Commission, and South Australian, Victorian or New South Wales State departments of primary industries.

Landholders are responsible for the control of locusts on their land.

Adults of the Australian Plague locust are identified by a characteristic black spot on the tip of the hind-wing, red shanks on the hind-legs and a distinct ‘X’ shaped mark behind the head. They are generally mottled brown in colour but can be grey or green. Adult males are 25-30 mm in length while females are somewhat larger at 30-45 mm. Nymphs are similar to adults but are wingless, and usually brown or green with dark legs. After hatching, nymphs develop through 5 growth stages (instars), with wing buds becoming more prominent at each stage. A full guide on the identification of the Australian plague locusts and other related grasshoppers can be found on this link in the Australian Plague Locust Commission (APLC) website.

Adults with adequate green feed can become sexually mature about 2 weeks after developing wings. Females select suitable sites for egg-laying, usually in areas of hard bare ground (such as clay-pans, tracks and road verges) or heavier soils, but occasionally lighter soils. Before laying, females may test-drill with their abdomen to assess soil condition. Eggs are laid in pods of 30-50 eggs at about 3-10 cm depth, and females usually lay 2-3 pods. Egg-laying activity is often aggregated, forming dense ‘egg beds’.

Egg development is dependent on soil and moisture conditions, and may be delayed (via quiescence) if conditions are too cold or dry. Eggs laid in summer may develop directly and hatch in 2-4 weeks. In southern areas, the majority of eggs laid during autumn enter winter diapause, resuming development in late winter and hatching in spring.

After hatching, nymphs undergo five growth stages before fledging into winged adults, completing development in 4-6 weeks. Adults require green feed for growth, to develop eggs in their ovaries, and accumulate fat reserves as fuel for migration. There are often three generations per year, approximately corresponding to spring, autumn, and summer generations, but may vary from to two to four depending on region and seasonal conditions.

Adult locusts migrate into agricultural areas from inland pastoral regions when favourable weather conditions enable population expansion and migration. Nymphs at the 2nd and 3rd instar stages form dense aggregations, called ‘bands’ that march and feed on green vegetation. Bands may match up to 500 metres per day in any direction. Adult locusts can form high density swarms that migrate long distances to areas where green feed is available. These swarms can devastate crops in spring.

Chemical control should target dense bands of wingless hoppers at the 2nd and 3rd instar stage.

All pastures and field crops containing green plant material are at risk. Perennial pastures such as lucerne, long season annual pastures and newly sown pastures are at greatest risk of attack later in the season, since they tend to remain green longer.

Swarms of adult locusts may fly in to crops or pastures and feed, causing severe damage. In cereals, it is the spring generation that affects crops. Less commonly, swarms may also fly into cropping areas in autumn and damage newly emerging crops.

Adults and nymphs can remove all green plant material in leaves, stems and grain heads. Maturing cereals are vulnerable to lopping of grain heads as locusts chew through the last remaining green material in the stem below the head. High density swarms are capable of completely devastating a crop overnight. In pastures, it has been estimated that 20 hoppers per m² eat the same as 3–5 dry sheep equivalent (DSE) per hectare. Summer rains and green feed may sometimes allow populations to persist into the following autumn and spring.

Landholders are responsible for the control of locusts on their own property. Monitor when egg hatching commences in spring. Predicted hatching date guidelines for each region are provided in locust bulletins produced by the APLC. Spring monitoring for hatching of nymphs should focus on areas where adult activity and egg-laying was observed in autumn. The APLC monitors locust populations across all states with the focus on the more arid regions. For warnings of locust outbreaks, information can be found from the ALPC (http://www.agriculture.gov.au/pests-diseases-weeds/locusts/current) or sourced through local state government authorities.

Call the Emergency Plant Pest Hotline on 1800 084 881 to report suspected cases of the Australian Plague Locust.

Where significant egg-laying has been detected, deep cultivation can reduce egg survival. Graze pastures or cut for fodder in late winter and early spring before the arrival of locusts.

A number of insecticides are registered (or have permits issued) for control of Australian plague locusts, including organophosphates, synthetic pyrethroids, carbamates and Metarhizium based-products. Refer to state-based departments for information. Chemical control should directly target dense bands of wingless hoppers at the 2nd and 3rd instar stage (approx. 6-10mm in length). If control of adults is required, it is recommended to spray in the early morning or late evening when locusts are settled. Bio-pesticides based on the naturally occurring Metarhizium (M. anisopliae) soil fungus specifically targets locusts and grasshoppers, and is primarily used in environmentally sensitive areas.

Much of this information was sourced from the APLC website: http://www.agriculture.gov.au/pests-diseases-weeds/locusts/about/australia