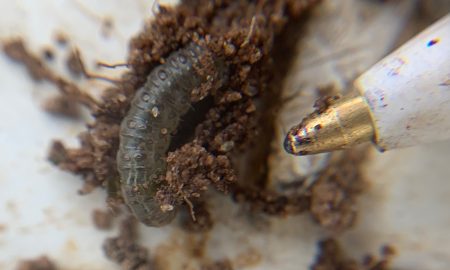 The Pasture webworm is a relatively minor native grass-feeding pest of pastures, but can cause large losses to establishing cereals (wheat, barley and rye) and grass pastures (barley, silver and brome grass) in Victoria, South Australia, New South Wales and Western Australia. There are four different species of pasture webworm (Hednota spp.). Disrupting the pasture and crop phase, particularly with cultivation, will help to reduce the likelihood of infection. Various synthetic pyrethroids and chlorpyrifos are registered for control of pasture webworm in pastures and forage crops.

Can cause large losses to establishing cereals although webworm is a relatively insignificant native pest of pastures.

Pasture webworms cause sporadic damage to cereal crops and pasture grasses in Victoria, South Australia, New South Wales and Western Australia. It has also been recorded in Tasmania.

Eggs are smaller than a pinhead, white when first laid and become red-orange as the embryo develops. They have a distinctively sculptured shell, with a series of longitudinal ribs which are divided by smaller transverse ribs, giving the surface a mesh-like appearance.

Larvae (caterpillars) are usually light-dark brown in colour and may have a tinge of the green gut contents showing through. They are about 1 mm long when newly hatched and, after passing through six moults (or instars), reach a maximum length of about 18 mm. They have a smooth body and shiny dark heads. Older larvae have darker raised patches on each segment. Most larvae, when found by growers, will be large enough to be identified by the presence of these darker raised patches.

Pupae are about 12 mm long and 3 mm wide, creamy-yellow at first, turning honey-brown and then darkening shortly before moth emergence. Pupation occurs underground.

Adult moths are slender, long-legged moths with enlarged mouthparts arranged in a beak-like projection. They are straw-coloured with darker markings on the forewings. Adults are about 10-12 mm long with a wingspan of about 22 mm. At rest the wings fold closely around the body in a nearly vertical position, enabling the moth to blend with its surroundings.

Pasture webworms have one generation a year including an obligatory resting stage in which the larvae over-summer in the soil. The adults emerge in autumn. During the day, the moths shelter in standing dry grass. Mating occurs shortly after emergence. Females lay eggs near the ground on pasture grasses, or on newly emerged early sown cereals. Egg laying lasts for about six weeks. Eggs hatch about one to four weeks later, depending on temperature, and the young larvae immediately begin to form silken tubes among the leaf blades and older larvae live in silk-lined tunnels in the soil. The early-hatched larvae finish feeding by June, but later-hatched larvae may not be fully fed until spring.

During spring the fully-grown larva deepens its burrow in the soil, ceases feeding and plugs the entrance with a heavily webbed silk cap. It then turns a creamy yellow colour (which is probably associated with the accumulation of fatty reserves) and enters an over-summering resting stage. Pupation occurs in early autumn and lasts for about three weeks.

Moths are easily detected as they fly up from pastures in the autumn; this serves as a warning of the risk of damage later that year. Newly hatched larvae climb up seedlings and feed on the upper surface of the blades only, which results in ‘windows’ in the leaf. Feeding mostly occurs in the centre of the leaf, and the damage on cereals resembles that caused by lucerne flea. Older larvae construct a vertical, web-lined tunnel in the soil from which they emerge at night to feed, often cutting the blades off at ground level and dragging them into their tunnels where they feed on one end of the blade from the safety of the tunnel entrance. The tunnels are often sited at the bases of severely damaged plants

Early opening rains in autumn assure green feed for young larvae. By contrast, late opening rains do not allow the growth of suitable green feed and many larvae die of starvation. Webworms are more likely to damage crops in warmer, drier conditions.

Pasture webworm may attack establishing crops of wheat, barley, triticale, rye and pasture grasses. Some grassy pastures are sown with cereals in years with early rains. If sown with minimal cultivation they are particularly susceptibility to damage by pasture webworm.

Pasture webworm damage is recognised by the presence of severed cereal plants or leaves that are spread at different angles in the crop. Sometimes leaves may protrude from silk-lined tunnels made at the base of the plants. The major damage occurs during seedling emergence and during the following few weeks of crop growth. In heavily infested areas bare patches appear in the crop usually within three weeks of plant emergence. These patches gradually enlarge and may give the impression that the crop has not emerged. With lower numbers of larvae, extensive thinning of the crop can occur. The severity and extent of damage varies from year to year, mainly depending on rainfall.

The incidence of pasture webworm damage tends to increase in crops sown following minimum tillage because larvae can survive the period between herbicide use and crop emergence. The higher larval density will completely destroy a crop.

Crops seeded into areas where fine, dry grasses were prevalent in autumn should be checked at emergence for signs of damage. Crops should be checked every four to five days over six weeks for signs of webworm damage, especially in warm, dry conditions. Young larvae shelter between the leaf blades while older larvae shelter in web-lined tunnels in the soil. Careful digging at the base of recently damaged plants may reveal web-lined tubes and caterpillars inside or a search at night may reveal feeding activity. When monitoring, look for leaves protruding from tunnels in the soil. Crops sown into paddocks where fine, dry grasses were prevalent during autumn are most at risk. Inspect seedlings in one square metre of crop if small webworms are suspected, or the top 2 cm of soil if large webworms are suspected.

There are no known parasites, predators or pathogens that effectively control pasture webworms.

When preparing paddocks aim to lessen the amount of grassy residue present, to reduce the chance of moths being attracted and to reduce the amount of food present for the webworm. In WA, more than 90 larvae a square metre can be found in a crop established with minimum tillage compared to one larva a square metre in a crop established with cultivation. Suggested management practices which may help reduce the likelihood of infestation are:

• prolonging the period between initial cultivation and sowing;

Maintenance of a vigorous pasture by use of weed control or fertiliser will help to reduce the likelihood of infestation.

Disrupting the pasture and crop phase, particularly with cultivation, will help to reduce the likelihood of infection.

Even heavily infested crops will recover if spraying is not delayed. Little benefit is obtained from spraying crops later than three weeks after crop emergence. Most of the damage would have been done by this time and, if damage is not severe, then older crops can compensate for continued damage by pasture webworm. Spot spraying of crops is possible when infestations are patchy. A buffer zone of 20 metres around the infestation should also be sprayed. Providing the leaves of the plant crown are green, spraying will allow quite badly affected crops to recover satisfactorily. Various synthetic pyrethroids and chlorpyrifos are registered for pasture webworm control in pastures and forage crops.

This article was compiled by Garry McDonald (cesar) and Sandra Hangartner.