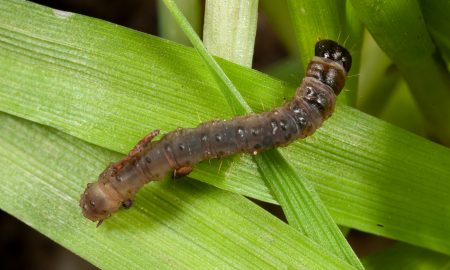 Pasture tunnel moths are endemic to Australia. Their larvae are grass-feeders and are a sporadic pest of pastures and some cereal crops in higher rainfall areas of Australia. The larvae construct vertical, silk-lined tunnels that protrude above the soil surface forming ‘chimneys’. They use these tunnels to hide during the day, emerging at night to feed nearby on crop or pasture plants.

Pasture tunnel moths are native to Australia and have been recorded in all eastern states of Australia, including Queensland (Darling Downs), New South Wales, Victoria, South Australia and Tasmania. They are generally a pest in higher rainfall areas, and are restricted to pastures/crops in areas with greater than 500 mm annual rainfall.

Pasture tunnel moth larvae have a slender (approximately 2-3 mm wide – about as thick as a match), grey-brown coloured body with a dull, matt almost translucent surface that makes them very inconspicuous in the soil. The head is black and shiny, contrasting with the rest of the body. Each abdominal segment has several rounded, shiny lumps each bearing a long hair; there are two pairs on top and a single one on each side. They grow from 25- 30 mm in length and have several long sparse setae (stout hairs) around the head.

Adult moths are elongate, white-cream in colour and glisten like satin. They are around 20 mm long and have a wingspan of approximately 25 mm. The abdomen tapers to a slender ovipositor and is longer than the folded wings.

Adults emerge from their pupation sites from late November through to January, with the time of emergence being influenced by rainfall; large emergences follow heavy rains. The moths remain among grasses during the daytime, and at sunset they are attracted to tall objects such as posts or tree trunks, where mating occurs. Egg-laying takes place late summer and early autumn.

The larvae cease feeding in October and then close the entrances to their tunnels.

Pasture tunnel moth larvae construct vertical, silk-lined tunnels about 70 mm deep that protrude above the soil surface forming ‘chimneys’ of about 8 mm in a collar of silk and grass fragments. They use these tunnels to hide during the day, emerging at night to feed nearby on crop or pasture plants. Often, rain stimulates pasture tunnel moth larvae to come to the surface and feed, however, heavy rains can wash away, or collapse, the tunnels.

Pasture webworm in that the older larvae also live in web-lined tunnels beneath the ground, but pasture tunnel moth larvae can be distinguished from pasture webworm by their slender size and the absence of webbing on leaves. Pasture tunnel moth tunnels are silk lined, and have an aboveground ‘chimney’, whereas pasture webworm tunnels have only an opening at ground level. Blackheaded pasture cockchafer larvae also live in underground tunnels but are the typical C-shaped scarab larvae tunnels.

Pasture tunnel moth can cause significant damage to annual and perennial grasses, and occasionally clovers. They have also been recorded damaging cereals (wheat, and barley) and canola crops, especially following a pasture phase.

When the insects occur in high densities, patches of establishing cereal crops or pastures may be completely defoliated. Damage is usually not noticed until early winter, with the worst period being from July until September. Damage is often not observed in lush pastures because only a thinning of the sward occurs. Infestations of greater than one hectare are rare.

The timing of pasture tunnel moth appearance in paddocks often coincides with the appearance of blackheaded pasture cockchafer.

Inspect paddocks for signs of damage and formation of chimneys or silk-lined burrows in mid-winter.

There are no economic thresholds established for this pest, however, densities of over 70/m2 appear to be damaging.

There are no known biological control agents for pasture tunnel moth.

See the APVMA website for current chemical options. There are no chemicals registered for the control of pasture tunnel moth, however, some growers have reported that similar products and rates used against blackheaded pasture cockchafers have provided satisfactory control.

This article was compiled at cesar by Alana Govender and Garry McDonald (cesar).