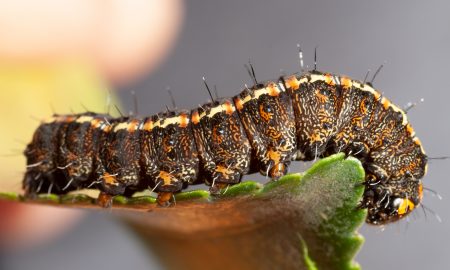 Pasture day moth is native to Australia recorded from south-eastern Australia and south-western Western Australia. Although widespread, it is a minor and irregular pest. In recent years it has caused problems in emerging cereal and pasture crops, canola and peas in some areas. The caterpillar has two prominent yellow spots near the end of the body.

The larva grows to 60mm long and is visually striking especially when fully grown. It is a dull dark brown with reddish-orange and yellow markings, and two distinctive yellow spots near the posterior end of the body. They are also noticeably hairy with prominent bristles when viewed closely. Adult moths are distinctive and colourful in appearance with wings that have orange-brown, yellow and black markings. They have orange rings around their abdomens.

Pasture day moth passes through one generation per year. Unlike most moths, the large adult moth flies during the day, and during autumn in April/May, hence the name. Eggs are laid in pasture and hatch with the autumn rains. Larvae feed, preferably on capeweed and other broadleafed plants, during winter and spring, and large numbers may be seen on the surface of pastures where they remain until fully grown. When they are fully grown they may be seen burrowing into the soil, excavating a vertical tunnel where they pupate in a cell at the bottom.

Unusual in noctuid moths, the adult moths fly close to the ground. Larvae feed mainly on broadleaf weed species. In June 2009, pasture day moth larvae were observed ‘marching’ into the edges of a canola crop from adjacent pasture in the lower south east of South Australia.

Larvae may be confused with brown pasture looper and recognised by their red markings and more distinctive bristles.

Broadleafed plants in pastures but will feed on all crops, damaging seedlings and desirable pasture species in the absence of their preferred weed hosts, especially after a knock-down herbicide has been applied. They have been recorded defoliating saltbush. In 2007, in the South West Slopes of New South Wales, caterpillars caused significant damage to sub clover and were also found attacking phalaris seedlings. In June 2009, pasture day moth larvae were reported damaging a canola crop in the lower southeast of South Australia, and also causing feeding damage to peas in the Adelaide Hills.

Although considered a minor pest, in recent years it has caused significant problems in NSW where larvae have attacked emerging cereal and pasture crops.

It has been rare for larvae of pasture day moths to damage anything except the broadleaved weeds in pasture, such as erodium and capeweed. However, in recent years, damage to emerging cereal and pasture crops, canola, peas, sub-clover and phalaris grass has been reported. Pasture day moth larvae chew on leaves.

Larvae can be seen in autumn and winter on plants.

There have been no thresholds developed.

Little is known of natural controls although the autumn rainfall must be critical for survival.

In 2007, chemical control in NSW was reported as being successful using alpha-cypermethrin. Before using insecticides read the label thoroughly and adhere to the registration advice.

In June 2009, when larvae were reported damaging a canola crop in the lower southeast of South Australia at levels of 2-4 larvae/m² up to 10 metres into the crop, a border spray was necessary to prevent further damage.

This article was compiled by Bill Kimber (SARDI).