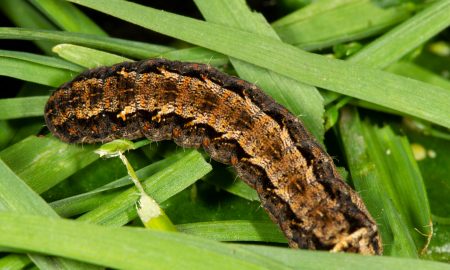 There is a range of species of caterpillar pests, broadly known as “herringbone caterpillars”, that defoliate grass pastures, cereals and to a lesser extent, legumes. They often co-exist with armyworms but do not cause the head-lopping damage that is sometimes associated with armyworm.

Very little is known about the pest group of this species and their biology in grains crops.

In all southern-eastern states of Australia. Reports are most commonly from South Australia in the pastoral country in the north Gawler Ranges and the cropping regions of central and upper Eyre Peninsula, and in the Victorian Mallee and Wimmera.

The Proteuxoa group belongs to the subfamily Acronictinae (Family Noctuidea) of the Order Lepidoptera (moths and butterflies). The genus was previously known as Rictonis.

In the early 1960s and late 1980s, the common name ‘white-tailed black cutworm’ was informally attributed to one of the common species of this pest group, due to a distinctive white marking on the last abdominal segment of the otherwise dark-coloured larvae. The species was thought to be Proteuxoa atrisquamata.

Much of the descriptive and biological information on this pest group is inferred from a Tasmanian study undertaken on the genus Rictonis in the 1970s. There is little other published research on this group.

Proteuxoa larvae often display a light or dark band along the upper abdomen, with a characteristic herringbone or chevron-like pattern of diagonal pale markings on either side of this on many of the abdominal segments. Colouration patterns are more obvious in larger larvae, while smaller larvae are more uniformly dark. Larvae of P. atrisquamata are dark in colour (paler underneath) with white hairs and two pale longitudinal bands flanked by the diagonal herringbone markings running down the back, sometimes with faint red and yellow patches.

Adult moths tend to be uniformly dark, often with reddish reniform marking mid-wing. The wingspan is about 3 cm across.

The Proteuxoa genus appears to have only one generation per year. Most evidence suggests that adult moths emerge from their over-summering pupation sites in the soil in late summer or autumn. Nonetheless, some adults may also emerge in late spring or summer. Most moths probably originate from a previous generation breeding in native vegetation to the north and northwest of the cropping zone. It is possible, or even likely, that moths move large distances before laying eggs; they are likely to migrate, mate and lay eggs in that order. The first egg-laying is likely to be synchronised with autumn rains and plant emergence but will continue into early winter, when young plants are numerous.

Eggs appear to be laid in clusters on plant surfaces or cemented into leaf crevices.

Larvae grow to about 40 mm in length through six stages (instars) of development, although seven instars are possible. In comparison to armyworms, the larval growth stages are quite protracted and mostly prevail throughout autumn and winter, concluding in August or September. The larvae pupate in the soil debris.

The adult moths of these caterpillars are most likely to fly into crops following short to long distance migrations. They are most active on warm, humid evenings during autumn. After eggs hatch, the young larvae mostly feed on leaves, even during the day. Older caterpillars are mostly active at night, and are commonly found by day on the soil surface, amongst plant debris or in the crown of a grass clump or crop plants.

The larvae of P. sanguinipuncta are brown, black, and cream. The head and thorax is narrower than the abdomen, and darker in colour. The body is striped, and there is a characteristic white diagonal stripe on each side of the seventh abdominal segment. The larvae grow to a length of about 40 mm. The adult is more striking than Proteuxoa. The forewings are a rich brown colour with several wavy transverse white lines edged with multiple black chevrons. There are also two black dots ringed with red in the central area of each forewing, and the wings are further decorated with small red flecks and dots. The hind-wings are pale brown. The wingspan is about 40 mm.

Eggs are ribbed vertically, oblong-shaped and are flicked out loosely (with small hooks) by the female moth on to open vegetation surfaces, often in mixed stands of green and dried foliage.

Peripyra sanguinipuncta is mostly a pest higher rainfall areas in cereals with heavy stubbles or of old rather than new grassy pastures. As with Proteuxoa, the species has one generation per year with a similar lifecycle. Peripyra sanguinipuncta larvae eat various grass species (Poacea) and are a minor pest of pastures and occasionally of crops. In the unusual event of extreme food depletion and crowding, later stage larvae of the P. sanguinipuncta have been known to form bands moving across crops and pastures in search of food, in a manner similar to armyworms. In this state, the larvae become distinctively darker and will march during the day.

Proteuxoa attack all cereals and grass pastures but have also been recorded on lentils, faba beans, lupins, vetch and capeweed. Tasmanian research on the genus suggests that they are primarily grass feeders.

Most damage has a low to moderate economic impact, and occurs in late autumn and winter. Larvae most often attack the lower parts of plants. Damage can be of greater significance in later sown crops that are less advanced. In cereals, caterpillars feed on the leaf margins of seedling and vegetative crops causing ‘scalloping’. Healthy advancing crops should outgrow moderate foliar damage. In legume crops such as lentils and faba beans, larvae will consume leaves, and possibly nip off smaller branchlets. Larger larvae consume greater volumes of leaves, and in extreme cases, seedlings and early vegetative crops may be largely defoliated.

There are several techniques for monitoring herringbone caterpillars which are identical to those of monitoring armyworm, each demonstrated here by a short video: a) use of a sweep net  in a crop, particularly in the early evening, provides an indication of the relative densities and stages of armyworm; b) A beatsheet sampling provides a better absolute measure; and c) ground searching. Although more time consuming, ground searches provide the best indication of the imminent damage potential of large larvae.

There are no economic thresholds for herringbone caterpillars.

Parasitic flies and wasps, predatory beetles and diseases are common in caterpillars of this group, and can suppress natural populations. Parasitoids and beetles attack early stage larvae while late stage caterpillars and pupae commonly succumb to parasitoids.

There are no known agronomic or cultural techniques to reduce infestations.

The use of insecticides in early spring to control caterpillars may be necessary to protect crops from extreme defoliation. Be aware of the trade-off in eliminating the beneficials that, in many cases, control moderate aphid and caterpillar populations. The loss of beneficials can often induce earlier or secondary pest outbreaks.

Hill L. 1979.  Biological and descriptive studies of Tasmanian Noctuidae (Lepidoptera) with an appendix on the taxonomy of the Tasmanian Dipsocoroidea (Hemiptera).  B.Sc (Hons) Thesis, University of Tasmania (312 pp)