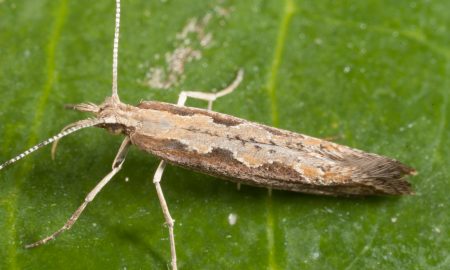 Diamondback moths are 10 mm long and grey-brown in colour with a white uneven stripe down the centre of their back. Larvae are small yellow-green caterpillars and are a major pest of canola and other brassica crops. There are significant issues with insecticide resistance. Biological control by small parasitic wasps (Diadegma semiclausum, Apanteles ippeus and Diadromus collaris) is most important.

Insecticide resistance in diamondback moth is a significant issue.

Diamondback moths are distributed across Australia, but are most common in southern states. Although they can be found throughout the year, they are most abundant in canola crops during spring.

Diamondback moths, also referred to as DBM or cabbage moths, are 10 mm long and grey-brown in colour with a white uneven stripe down the centre of their back. When the moths are at rest this uneven shape forms a ‘diamond’ pattern on their wings. They have beak-like mouthparts. Eggs are pale yellow, oval and about 0.5 mm long. Larvae are pale yellowish-green in colour, can grow up to 10mm in length and have a body shape that is slightly tapered at each end. The 2nd and 3rd instar larvae have a dark head. Pupae are a cream-green colour, which darkens before the adult moth emerges.

Female DBM lay more than 100 eggs in their lifetime, either singularly or in clusters along leaf veins, shortly after mating. Eggs hatch in about 4-6 days. 1st instars tunnel into leaf tissue. Larvae go through four instar stages before they pupate. The rate of development from eggs to moths depends on temperature; faster in warm weather and slower in cool weather. At 28°C the lifecycle takes 14 days, whereas at 12°C the lifecycle takes more than 100 days.

Adults are active at dusk and during the night, and usually do not move far within a crop. They can migrate long distances on winds. First instars are not visible as they live and feed inside leaf tissue. 2nd and 3rd instars feed on the leaf surface, usually on the undersides, or on developing flowers, and wriggle vigorously when disturbed.

Canola and other brassica crops. Alternative hosts include wild radish and Lincoln weed.

Small larvae feed on leaves, producing ‘windows’ and small holes in the leaves. Feeding is often concentrated on the underside of leaves. Older larvae graze on stems and pods. As flowering progresses, increasing numbers of larvae move to the floral buds, flowers and pods. Larvae may feed on small young pods while mature pods are usually only surface grazed. Heavy infestations can cause severe defoliation, which can reduce crop yields. Canola can tolerate considerable foliar feeding damage without impacting yield.

Canola should be monitored from late winter to late spring/early summer. Search for the presence of larvae on leaves, buds and flowers, especially during flowering and podding. Sample crops by sweep netting. Take a minimum of 5 sets of 10 sweeps in several parts of the crop and calculate the average number of the larvae per 10 sweeps. If no diamondback moth are detected the crop should be monitored again in a fortnight.

It is important to re-monitor 5-7 days after a spray treatment.

Weather conditions can dramatically affect populations. Greater than 5-8 mm of rain in 24 hours can reduce larvae numbers as they are dislodged and drowned or killed by disease.

Control summer and autumn weeds in and around paddocks to reduce the survival of larval populations.

When using agricultural chemicals always read the label or permit. Only use products registered for the targeted crop. Do not exceed the maximum crop rate. Adhere to the withholding period.

This article was compiled by Greg Baker and Bill Kimber (SARDI).