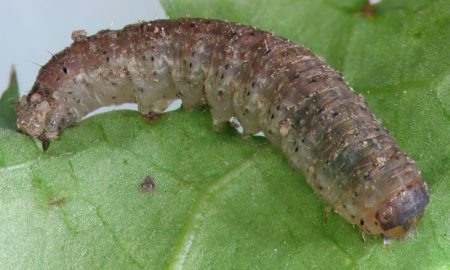 Cutworms are caterpillars of several species of night-flying moths, one of which is the well known bogong moth. The mature grubs are plump, smooth caterpillars. The caterpillars are called cutworms because they cut down young plants as they feed on stems at or below the soil surface. They are most damaging when caterpillars transfer from summer and autumn weeds onto newly emerged seedlings. Natural predators and early control of summer and autumn weeds will help reduce larval survival prior to crop emergence. If required, cutworms can be controlled with insecticides; spot spraying may provide adequate control.

Cutworms are a sporadic pest of all field crops and are most damaging when caterpillars transfer from summer and autumn weeds onto newly emerged seedlings.

There are several species of pest cutworms that are all similar in appearance. Generally larvae of all species grow to about 40-50 mm long and are relatively hairless, with a distinctly plump, greasy appearance and dark head.

Eggs are laid on plant material near the soil surface. They are creamy-white when laid and take three days to several weeks to hatch depending on the temperature. The newly emerged caterpillars grow with several moults until they are full size and then pupate in the soil. Moths emerge from the pupae. It may take one month or a full year to complete a cutworm’s lifecycle depending on the species involved and temperature.

Cutworm larvae are generally nocturnal. They hide under the soil surface, soil clods or litter and come out at night to feed, although day feeding above the ground does occur occasionally, particularly when the larvae are in high densities. Caterpillars often curl up when disturbed. During the night, adult moths are strong fliers and may be seen around lights or on window panes.

Cutworm larvae and adults have a broad resemblance to armyworms, the native budworm, lesser budworm and the cotton bollworm, but in each case lack the obvious stripes.

All field crops, including cereals, pulses, oilseeds and pastures.

Larvae feed at ground level, chewing through leaves and stems. Stems are often cut off at the base, hence the name ‘cutworm’. Winter crops are most susceptible in autumn and winter, although damage can occur throughout the year, especially in irrigated crops. Damage mostly occurs at night when larvae are active. When numbers of larvae are high, crops can be severely thinned. Smaller larvae can cause similar damage to lucerne flea when they feed on leaf surface tissue. Young plants are favoured and are more adversely affected than older plants.

Occasionally another undescribed genus of caterpillars marked with a herringbone pattern on their abdomen inflict cutworm-like damage on emerging crops.

Check crops from emergence through to establishment. Look for patchy areas or parts of the crop that have been thinned. Larvae are mostly nocturnal but some species might be found feeding in the late afternoon. During the day they hide under clods of soil or bury themselves in the soil. Check the base of recently damaged plants, and healthy surrounding plants, by scratching the soil to reveal hidden larvae.

Treatment of cereals and canola is warranted if there are two or more larvae per 0.5 m of row (Bailey, 2007).

As autumn cutworm populations may be initiated on crop weeds or volunteers in and around the crop, removal of this green bridge 3-4 weeks before crop emergence will remove food for the young cutworms.

If required, cutworms can be easily controlled with insecticides, and spot spraying may provide adequate control. Spraying in the evening is likely to be most effective.

If required, cutworms can be easily controlled with insecticides. Several chemicals are registered for controlling cutworms, depending on the state and crop of registration. Spot spraying often provides adequate control in situations where cutworms are confined to specific regions within paddocks. Spraying in the evening is likely to be more effective as larvae are emerging to feed and insecticide degradation is minimised.

Common IFM. 1954. A study of the ecology of the adult bogong moth, Agrotis Infusa (Boisd) (Lepidoptera: Noctuidae), with special reference to its behaviour during migration and aestivation. Australian Journal of Zoology 2: 223-263.