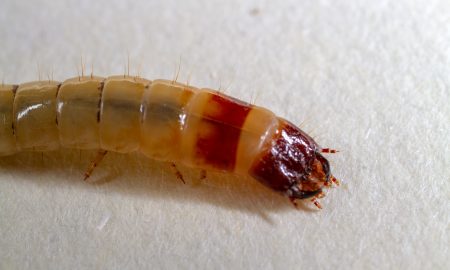 True wireworms are similar in appearance to false wireworms but can be mostly distinguished by their flattened head and often by the presence of a flattened, serrated tail plate. They are found across most states of Australia and the larvae are soil dwelling, being most common in wetter soils. They usually attack cereals but occasionally damage pulses and canola. Early detection, before sowing, is important if control is to be successful.

Post-emergence sprays are not effective.

There are numerous true wireworm species in Australia and are generally only a sporadic pest. Native to Australia, they are found across most states.

Larvae typically grow to 15-40 mm long and range in colour from creamy-yellow to red-brown. They have soft, elongated and cylindrical bodies that are somewhat flattened towards the head. The wedge-shaped head is usually darker in colour.

The lifecycle of many true wireworms is poorly understood. Adults are typically found in summer and autumn and shelter under the bark of trees during winter. Adult beetles often lay eggs in late summer. Larvae emerge in autumn and most damage to crops occurs from April to August. Depending on the species true wireworms can have one or several generations each year, although mostly one.

Larvae are soil dwelling and slow moving. Adults are known as ‘click’ beetles due to their habit of springing into the air with a loud click when placed on their backs.

Larvae are similar to false wireworms, including the eastern false wireworm and the vegetable beetle, as well as carabid beetle larvae. Carabid larvae have distinctive pincer-like mandibles on the head.

Largely confined to cereals such as wheat, barley, triticale and oats, although occasionally reported in some pulse crops and canola. They can be found more commonly in grassy pastures.

Larvae attack germinating seed and underground stems of cereals and may also feed on the roots of seedlings. Germinating seedlings can be ring-barked and hypocotyls severed just below the soil surface, causing wilting and seedling death. Damage can result in thinning and bare patches within crops, and severe damage may require re-sowing.

The risk period is at the seeding stage shortly after plants emerge.

True wireworms prefer low-lying, poorly drained paddocks and are most common in wetter soils. Check paddocks prior to sowing by digging to a depth that includes the moist soil layer where larvae will be present, and at least 10cm. Repeat this process a number of times across the paddock to get a representative sample. Paddocks coming out of long-term pasture are at most risk.

Germinating seed baits can be used immediately following the autumn break. Soak wheat seed in water to initiate germination, then bury several seeds under 1 cm of soil at each corner of a 5 x 5 m square grid, marking each with a flag. Immediately after seedling emergence, re-visit the bait site, dig up the plants and count the number of larvae present. Repeat this at 5 locations per 100 ha to obtain a reasonable estimate of numbers.

As wireworms can be found beneath plant debris, check under stubble before sowing.

An average of 10 larvae/m2 may warrant control. Average densities of 40 larvae/m2 can cause enough damage to require re-sowing (Bellati et al. 2010).

Carabid beetles and larvae are known predators of soil-dwelling insects including true wireworm larvae. However, they are usually not present in high enough numbers to effectively control large pest populations. Additional natural enemies include spiders, native earwigs, other predatory beetles and birds after cultivation.

Stubble retention and minimum tillage are thought to contribute to the build-up of true wireworm populations. Removal of stubble before egg laying, or cultivating soil in summer and autumn will discourage egg laying and reduce larvae numbers. Consider sowing canola or a pulse crop if high populations of this pest are present.

Wireworms can only be controlled if they are detected before sowing.