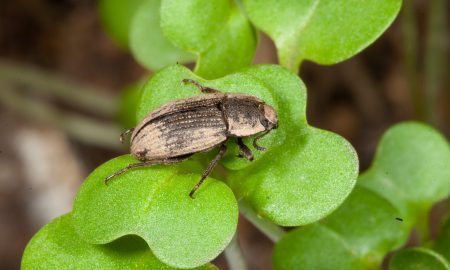 The vegetable beetle (or southern false wireworm) is one of several groups of false wireworms found in Australia. Larvae have cylindrical elongated bodies that are cream-yellow or tan in colour. They occasionally attack cereals, while adults, which are small dark grey-black and matte coloured beetles, can be problematic in canola or cereals. The management of stubble provides an effective avenue to control the pest.

Vegetable beetles are native insects that usually eat decaying organic matter and are common in fine textured soils, with high levels of organic matter. They are not usually a problem on compacted soil. Stubble retention and trash can favour these pests and some species can attack successive crops. Both the larvae and adults may cause damage depending on the crop and time of year. Vegetable beetle adults and larvae are a sporadic pest in Western Australia, Queensland, New South Wales and Victoria.

Both larvae and adults of vegetable beetles can be a sporadic problem on emerging crops.

There are numerous species of vegetable beetles, most commonly Gonocephalum elderi and G. macleayi. Larvae typically grow to about 18-20 mm long, and are hard-bodied and shiny in appearance with a body colour that is cream-yellow or tan.

They have hard cylindrical and elongated bodies with 6 legs. They lack the two spines that are obvious on the final segment of many other false wireworm larvae.

Adults of common species are oval in shape, 6-8 mm long and 3 mm wide, matte dark grey-black in colour and often mottled or covered in soil. They are sometimes referred to as ‘pie-dish beetles’ due to their body shape and the broad flanges (rims) around the edges of their body.

Vegetable beetles have one generation per year, with adults emerging from the soil in spring after pupation; nonetheless, adults can be present all year round. Larvae may be present in the soil from autumn through to spring.

Eggs are usually laid near a food source in autumn. Larvae hatch and feed underground on roots. Adults emerge in spring and survive through summer and well into winter. They can be found in very large numbers in heavy stubble or pasture residues where they feed on the decaying organic matter.

Larvae of most false wireworm species prefer to feed on decaying stubble and soil organic matter. Adults can fly but will only do so when it is warm.

Larvae are a minor pest of cereals. Adults can be problematic in emerging canola as well as spring-sown crops such as sunflowers.

Adult beetles generally feed on decaying vegetable matter, however in some situations they will attack emerging winter or spring-sown canola crops or lupins. They are capable of chewing plants above ground, ring barking or completely cutting stems. Adults can cause damage to canola plants up to the 5-8 leaf stage. Trials under laboratory conditions have shown that vegetable beetles will cause greater damage to canola under good growing conditions, at temperatures at or above 15°C

Vegetable beetle larvae are soil dwelling and attack winter cereal crops by boring into germinating seeds, or chewing on seedling roots and shoots. The larvae tend to feed exclusively below the soil surface.

Over a number of years in the 2000’s, there was an increase in reports of vegetable beetles attacking crop plants in many regions of south-eastern Australia. The trigger for this increase may have been related to dry periods in early winter. High populations (> 100 per m²) were often associated with patches of previously high plant residues. Factors including temperatures > 20°C, moisture stressed crops, and light, dry soils were associated with cases where vegetable beetles were found attacking crops.

Inspect paddocks for both adults and larvae prior to sowing. Check under stubble prior to sowing or use pitfall traps. Germinating seed baits can be used immediately following the autumn break. Soak wheat seed in water to initiate germination. Then bury several seeds under 1 cm of soil at each corner of a 5 x 5 m square grid. Immediately after seedling emergence, re-visit the bait site, dig up the plants and count the number of larvae present. Repeat this at 5 locations per 100 ha to obtain an accurate estimate of numbers.

Treatment may be required if more than 25 larvae per m² are observed (Bailey 2007). There are no thresholds available for adult beetles.

Carabid beetles are known predators of soil-dwelling insects including vegetable beetle larvae. However, they are usually not present in high enough numbers to effectively control large pest populations. Additional natural enemies include spiders, native earwigs and other predatory beetles. Fungal diseases caused by Metarhizium anisopliae and Beauveria bassiana can attack false wireworm populations but their effectiveness in the field is not fully understood (Allsopp 1980).

Vegetable beetle appear to build up in zero till and stubble retention crop systems especially on swath rows. Raking and/or burning the stubble provides high levels of control. In WA trials, raking the stubble has reduced numbers of adults more effectively than the use of insecticide. Cultivation before seeding may also reduce the survival rate of larvae. Increasing the seeding rate if sowing into a paddock known to contain vegetable beetles may maintain crop density. Consider sowing a pulse crop if high populations of this pest are present. Use of a press wheel at sowing can minimise larval attack. Set wheel at 2-4 kg per cm width after planting rain or 4-8 kg per cm in dry soil.

Vegetable beetles appear to have a high tolerance level to insecticides. In experiments conducted in Western Australia, it has been found that vegetable beetles are difficult to kill using foliar applications of insecticides aimed at other species such as vegetable weevils. Adults may also be controlled with insecticide incorporated into baits if damage occurs after sowing. If damage occurs after sowing, no treatment is available, other than resowing bare patches with an insecticide treatment.

Broadscale insecticide use may have severe impacts on non-target organisms.

This article was compiled by Paul Umina (cesar) and Garry McDonald (cesar).