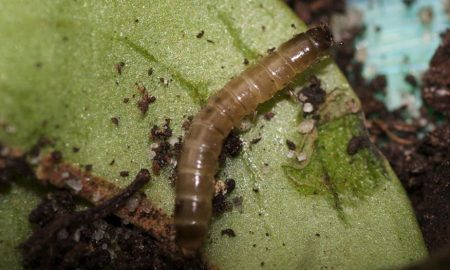 False wireworms (or mealworms) are common, soil-inhabiting pests of newly sown winter and summer crops that can become a sporadic pest in Queensland, New South Wales and Victoria. The grey false (or small) wireworm is one of a few groups of false wireworms found in Australia. Larvae are brown or black and grow to about 10 mm long with two prominent upturned spines on the end of the last segment. They are a pest of canola, in particular when germination is slowed by continued dry weather. Carabid beetle predators, trash removal techniques, insecticide seed treatments and use of press wheels at sowing may all reduce false wireworm populations.

Grey false wireworms (sometimes called the small false wireworm) are native to Australia and have been recorded in Queensland, New South Wales, Victoria and South Australia. They are widespread but only occur as a sporadic pest. They are commonly found in cracking clays or grey clay soils.

Grey false wireworms are commonly found in cracking clays or grey clay soils and can become a pest of canola, in particular when germination is slowed due to continued dry weather.

Larvae are shiny brown – black on top with paler under-surface. They have elongated and cylindrical bodies that are somewhat flattened towards the head. They have two prominent upturned spines on the end of the last body segment. Fully grown larvae only reach 10-12 mm in length and approximately 1.5 mm in width. When larvae are disturbed they lay motionless for a few seconds and then move around rapidly; their shiny reflective bodies becoming more evident in the sun. Adult beetles are brown or dark brown and grow to approximately 8 mm long. NB. This species was previously known as Isoperon punctatissimus.

Grey false wireworms usually complete only one generation per year, with soil temperature and moisture being the limiting factors.

Adults emerge from the soil in December and January, shelter under organic material and in soil, and lay eggs in or just below the soil surface among crop litter. Hence, larvae are most commonly found in stubble-retained paddocks. Eggs hatch 7-14 days later. Larvae are found in loose clusters within the top 10-20 mm of moist soil and feed on soil organic matter. Larvae develop over autumn, winter and spring, and when fully grown, burrow deeper where they pupate. Adults emerge in late spring or early summer.

Larvae of most false wireworm species prefer to feed on decaying stubble and soil organic matter. When the soil is reasonably moist, the larvae are likely to aggregate in the top 10-20 mm where plant litter is amassed. However, when the soil dries, the larvae move down through the soil profile, remaining in or close to the subsoil moisture, and occasionally venturing back to the soil surface to feed. Feeding often occurs at night when the soil surface becomes dampened by dew.

Larvae are very similar to the bronzed field beetle (8-10 mm) and may also be confused with true wireworms (flattened tail segment) or the eastern false wireworm (20-50 mm with no tail spines). Adults may also look slightly similar to carabid beetles.

Grey false wireworm larvae attack germinating seed and emerging seedlings. They chew hypocotyls, ring bark stems at ground level and sever plant roots, which can eventually cause seedling death. Damage appears as large bare patches and patchy seedling emergence. Re-sowing of severely damaged crops may be required. The injury to the seedlings makes them susceptible to dehydration and disease infection. Feeding damage is often most severe when germination is slowed by continued dry weather.

Grey false wireworms often recur within the same area of a paddock from year to year. Paddocks that will be sown to canola should be monitored from late autumn onwards. Check under stubble prior to sowing or use pitfall traps. Monitoring should continue soon after canola is sown by digging an area approximately 30 x 30 cm and counting the number of larvae in the top 20 mm of soil. Repeat this process 10 times across the paddock to get a representative sample.

Germinating seed baits are also an effective option to assess the presence of the grey false wireworms and can be used immediately following the autumn break. Soak wheat seed in water to initiate germination. Then bury several seeds under 1 cm of soil at each corner of a 5 x 5 m square grid. Immediately after seedling emergence, re-visit the bait site, dig up the plants and count the number of larvae present. Repeat this at 5 locations per 100 ha to obtain an estimate of numbers. For a brief demonstration of a comparable process in summer crops, see this link.

Carabid beetles are known predators of soil-dwelling insects including grey false wireworm larvae. However, they are usually not present in high enough numbers to effectively control large pest populations. Additional natural enemies include spiders, native earwigs and other predatory beetles. Fungal diseases caused by Metarhizium anisopliae and Beauveria bassiana can attack false wireworm populations but their effectiveness in the field is not fully understood (Allsopp 1980).

Stubble retention and minimum tillage are thought to contribute to the build-up of grey false wireworm populations. Removal of trash is an effective management strategy. Methods of stubble removal may include cutting, baling, grazing or burning. Clean cultivation over summer will starve adults and larvae by exposing them to hot dry conditions, thus preventing population increases.

Reseeding with higher seeding rates may be an option in bare areas. Using a re-sowing method that disturbs the soil surface, leaving larvae vulnerable to predation, is recommended.

Carabid beetle predators, trash removal techniques, insecticide seed treatments and use of press wheels at sowing may all reduce damage by false wireworms.

See the APVMA website for current chemical options. Chlorpyrifos is registered as a foliar spray against false wireworms in certain broadacre crops in some states. Several insecticide seed treatments are also registered for false wireworm control in certain broadacre crops in some states. Most chemicals registered for false wireworm control are seed treatments, although these may not be consistently reliable. They probably work best when the seedling grows rapidly in relatively moist soils. Adults may also be controlled with insecticide incorporated into baits if damage occurs after sowing. Otherwise, if damage occurs after sowing, no treatment is available, other than re-sowing bare patches with an insecticide treatment.

False wireworm can not be controlled by applying chemicals after sowing; monitoring before sowing is recommended

Curtis JE and Horne PA. 1995. Effects of chlorpyrifos and cypermethrin applications on non-target invertebrates in a conservation tillage crop. Australian Journal of Entomology 34, 229-231.