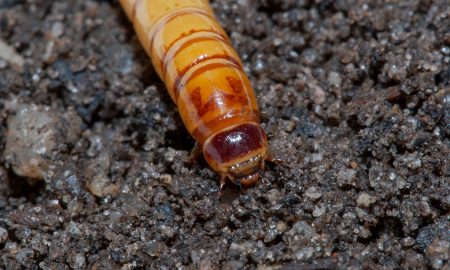 Eastern false wireworm is an occasional pest of cereal crops in eastern Australia. They are similar to although often larger than other false wireworms, including the bronzed field beetle and the vegetable beetle. Larvae have cylindrical elongated bodies that range in colour from creamy-tan to yellow-orange.

Stubble retention and minimum tillage are thought to contribute to population build-up.

Known to occur in Queensland, New South Wales and Victoria.

There are numerous species of Pterohelaeus, although P. darlingensis and P. alternatus are most common in cropping systems. Technically, P. darlingensis is the species mostly referred to as the eastern false wireworm.

Eastern false wireworm larvae are typically large and range in colour from cream-tan to yellow-orange. They have a hardened cylindrical body with a darker ring around each segment, giving the appearance of bands. Fully grown larvae can reach about 50 mm in length. They have 6 legs and a rounded head. Eastern false wireworm larvae do not have obvious upturned spines on the end of the last segment like some other false wireworms. Adult beetles are dull black in colour and approximately 25 mm long. They are sometimes referred to as ‘pie-dish beetles’ due to their body shape and the broad flanges (rims) around the edges of their body.

Adults lay eggs in summer-autumn in the soil near crop residues or organic matter. Eggs are laid singly under dried stubble and hatch 7-14 days later and larvae are found in loose clusters within the top 10-20 mm of moist soil. Larvae develop over autumn, winter and spring, and when fully grown, burrow deeper where they pupate. Adults emerge in late spring or early summer. Eastern false wireworms may have two generations per year under ideal conditions, however, soil temperature and soil moisture are likely to prevent this in most regions.

False wireworms move through the soil to remain just above the level of soil moisture. Larvae feed on grain, germinating seed and subsequently bore into underground stems of cereal plants causing withering and death. They can be particularly prominent after a pasture phases of 4-5 years. The crop feeding causes thinned or bare patches in the paddock. Where two generations occur in a year, larvae are active between autumn and spring before adults of this generation aestivate during spring and summer. The summer generation larvae are active during spring and summer with adults aestivating in autumn and winter.

False wireworms can survive through continuous cropping by feeding on stubble mulch.

Predominantly cereals, but also may be an occasional pest of canola.

Adult beetles and larvae may damage plants by chewing stems at or below ground level, causing them to fall over or wither while standing. Larvae can also attack plant roots and germinating seeds, causing a patchy germination of the crop. Generally larvae will only attack germinating crops if the soil is dry and if there is insufficient soil moisture and organic matter from which to feed.

Check paddocks prior to sowing by digging to a depth that includes the moist soil layer where larvae will be present. Repeat this process a number of times across the paddock to get a representative sample. Paddocks coming out of long-term pasture are at most risk.

Alternatively, germinating seed baits can be used immediately following the autumn break. Soak wheat seed in water to initiate germination. Then bury several seeds under 1 cm of soil at each corner of a 5 x 5 m square grid, and give the immediate area a water with 1-2 litres. Immediately after seedling emergence, re-visit the bait site, dig up the plants and count the number of larvae present. Repeat this at 5 locations per 100 ha to obtain an estimate of numbers. For a brief demonstration of a comparable process in summer crops, see this link.

In cereals, treatment may be required if there are more than 10 larvae per m2 (Bailey 2007). If using germinating seed baits, treatment is required if more than 25 wireworm larvae are found in 20 baits (Miles and Lloyd 2007).

Carabid beetles are known predators of soil-dwelling insects including eastern false wireworm larvae, however, they are usually not present in high enough numbers to effectively suppress large pest populations. Other natural enemies are likely to include spiders, native earwigs and other predatory beetles.

Fungal diseases caused by Metarhizium anisopliae and Beauveria bassiana can attack false wireworm populations but their effectiveness in the field is not fully understood (Allsopp 1980).

Stubble retention is thought to contribute to the build-up of eastern false wireworm populations. Removal of trash is an effective management strategy. Methods of stubble removal may include cutting, baling, grazing or burning. Cultivation before seeding may reduce the survival rate of larvae. Use press wheels at sowing, which are set at 2-4 kg per cm width after planting rain or 4-8 kg per cm in dry soil. Consider sowing a pulse crop if high populations of eastern false wireworms are present.

False wireworm cannot be controlled by applying chemicals after sowing; monitoring before sowing is recommended.