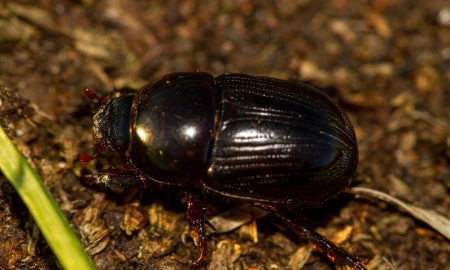 The African black beetle is an introduced beetle that appears similar to cockchafers but generally occurs earlier in the year and is usually found on or under the soil. Both adults and larvae attack pastures and cereals. The beetles are of considerable economic importance because, while they attack cereals, they also attack a wide range of horticultural crops and long-term pastures. Damage by these beetles and their larvae can be reduced by delaying autumn sowing, or applying insecticide seed treatment.

It is native of Africa, now present in Australia and the North Island of New Zealand. A sporadic agricultural pest found in Western Australia, South Australia, Victoria, New South Wales and Queensland, the African black beetle has not been recorded in Tasmania.

African black beetle larvae are soil dwelling and are typical white, soft-bodied scarab grubs. They have ‘C’-shaped bodies, six legs and a yellow-brown head capsule with noticeable black jaws. Late stage larvae are 25-30 mm in length. Newly hatched larvae are about 5 mm long. The abdomen towards the rear is generally swollen and darker in colour.

Adults are shiny black, slow moving and have a cylindrical body that is approximately 12-14 mm long. From above, the body sides are almost parallel and the wing covers have lightly indented longitudinal striations.

African black beetle has one generation per year, but in some seasons the generation can take two years. Eggs are laid in the soil in spring and hatch in two to five weeks depending on temperature. Larvae hatch and pass through three growth stages before pupating and emerging as adults between late December and early February. The period from eggs to adults is approximately three to four months, while the adult lifespan is about ten months. Adults remain sexually immature until spring when mating and oviposition occurs. Larvae are generally present from late spring to mid-summer but may be found during winter. These are late developers and fail to survive.

African black beetles have strong nocturnal flight activity, and disperse during their ‘roaming’ stage leading to crops becoming infested. Flights during summer to autumn can be observed as activity increases around lights on buildings etc. Beetles are attracted to grassy areas or those with heavy mulching.

Adults chew plants at or just beneath ground level and may chew right through the stem or cause ‘ring barking’ on larger plants.

Unlike the cockchafer pests, the African black beetle adult and larvae are both capable of causing severe plant damage.

Other scarabs and cockchafer larvae, including the yellowheaded cockchafer, redheaded pasture cockchafer and other pasture scarabs.

African black beetles are normally associated with damage to long-term pastures and grasses, turf and some horticulture crops. They also attack several cereal crops including barley, triticale and wheat.

Damage can be caused by adults feeding on the stems of young plants either underground or above the soil surface, often killing growing points so that the central shoots wither and the plants die. Older plants usually survive, but remain weak. Larvae prune or completely sever roots of perennial grasses and in severe cases where larval populations are high, pasture becomes patchy and can be rolled back like a carpet.

Soil-dwelling third instar larvae cause most damage to pastures by cutting of roots below the soil surface.

Inspect susceptible paddocks prior to sowing. Check crops and newly sown pastures for the presence of adults and damage in autumn-early winter. Adults can be found on or under the soil surface, to a depth of about 15 cm. Monitor crops and pastures in late spring to mid-summer for larval damage. Inspect susceptible paddocks prior to sowing by digging to a depth of 10-20 cm with a spade and counting the number of larvae present. This should be repeated 10-20 times to get an estimate of larval numbers. Four larvae per spade square is roughly equivalent to 100 larvae per m2.

While there is a commercially available nematode (Heterorhabditis zealandica) for the biological control of African black beetle in turf and other high value crops, these are unlikely to be cost effective in broad acre crops.

There are a number of agronomic options that may reduce the intensity of black beetle damage, particularly if they are a continual problem.

Delay autumn sowing until May as adults decrease their feeding activity during winter.

Increasing seeding rates is a useful option in paddocks where the pest is anticipated to cause damage.

There is some evidence that liming in acid soil environments can reduce the survival of young black field beetle larvae.

Consider removing kikuyu grasses well prior to seeding as this grass is a favoured food plant for black beetle and can sustain high beetle populations. Keep the paddock as bare fallow for as long as is feasible prior to planting. When considering this option assess the susceptibility of the paddock to wind and water erosion.

Poncho Plus® has recently been registered as a seed protectant against African black beetle and yellow headed pasture cockchafers in pastures. Control is expected for 3-4 weeks after sowing, but will not control heavy populations. Chlorpyrifos is registered in maize however no other foliar insecticide is registered for African black beetle control in broadacre crops. Larvae live underground and are unlikely to be affected by foliar applications of insecticides. Adults may be killed before they lay eggs during spring, however monitoring for the presence of adults is critical. If the spray is applied too early (e.g. August), the adults may not have become sufficiently active to be killed; if the spray is applied too late (e.g. mid-October), the adults may have already laid their eggs. Adhere to product label. See APVMA for current chemical options.

In New Zealand, a new and promising biopesticide based on the naturally occurring bacterium Yersinia entomophaga, is being evaluated in field trials in 2015-16.