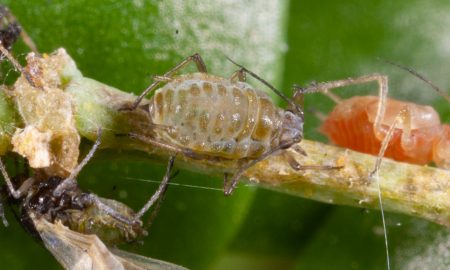 The turnip aphid is a common and widespread aphid species that forms clusters on canola flowering spikes in spring. Colonies are covered in a light waxy substance. Turnip aphids are known to transmit several plant viruses that can contribute to yield losses, including beet western yellows virus, cauliflower mosaic virus and turnip mosaic virus.

Turnip aphids are common pests of canola and other cruciferous forage crops in many parts of Australia. They are widely distributed and have previously been recorded in Queensland, New South Wales, Victoria, South Australia, Tasmania and Western Australia. Populations generally peak in late winter and spring. Turnip aphids are common in districts or seasons with warm, dry weather.

Turnip aphids grow up to 3 mm long and have an olive to greyish-green coloured body with dark bars on the abdomen. Adults can be winged or wingless. Nymphs are similar to adults but are smaller in size and do not have wings.

Winged aphids fly into crops from wild radish, wild turnip and other cruciferous plants, and colonies of aphids start to build up within the crop. Aphids can reproduce both asexually and sexually however in Australia, the sexual phase is often lost. Aphids reproduce asexually whereby females give birth to live young. Mature females can produce many generations during the growing season.

Temperatures during autumn and spring are optimal for aphid survival and reproduction. During these times, the aphid populations may undergo several generations. Populations peak in late winter and early spring; development rates are particularly favoured when daily maximum temperatures reach 20-25°C. These temperatures give rise to dense colonies on flowering spikes. Turnip aphids are more susceptible to cold weather than cabbage aphids. Development will cease or slow if temperatures fall below 9°C.

Nymphs, which do not have wings, go through several growth stages, moulting at each stage, before becoming adults. When plants become unsuitable or overcrowding occurs, winged aphids, called alates, develop and migrate to other plants or crops.

Turnip aphids form dense colonies usually around growing tips. These colonies are typically covered with a fine wax; this is not as obvious as that on the cabbage aphid.

Other aphids, in particular the cabbage aphid and green peach aphid.

Turnip aphid infestations start when winged aphids fly into crops from autumn weeds. They are most prolific in autumn and spring when the warm weather enables them to rapidly multiply.

Adults and nymphs suck sap from plants and high numbers can result in reduced yield by reducing pod set, pod fill and grain quality. Colonies on leaves often become evident by the distortion and discoloration (yellowing) of infested parts. Canola is most sensitive to aphid damage during bud formation through to late flowering. Secretion of honeydew by aphids can cause secondary fungal growth, which inhibits photosynthesis and can decrease plant growth.

Turnip aphids cause indirect damage by spreading plant viruses. Aphids spread viruses between plants by feeding and probing as they move between individual plants and paddocks. The ability to transmit particular viruses differs with each aphid species and viruses may be transmitted in a persistent or non-persistent manner (see below). This influences the likelihood of plant infection.

Turnip aphids transmit many viruses that can contribute to yield losses in canola, including cauliflower mosaic virus (CaMV), turnip mosaic virus (TuMV) and beet western yellows virus (BWYV, syn. turnip yellows virus). These viruses are widespread and surveys have found that in some situations most crops have some infected plants. These viruses are not seed-borne. They survive in weeds or volunteer host plants during the summer and are then spread from these plants into crops by aphids that act as a vector for transmission. Yield loss is greater in crops that have been infected as seedlings. Infections can occur past the rosette stage of canola growth but these often have little effect on yield.

Turnip aphids also transmit cucumber mosaic virus (CMV). CMV is a seed- and aphid-borne virus that infects narrow-leafed lupins and many other broad-leafed plant species. CMV is transmitted non-persistently: an aphid picks it up within one to two seconds while probing an infected plant, but the virus is then lost again when the aphid probes one or two healthy plants.

Monitor for turnip aphids weekly from late winter onwards, but especially during flowering and grain fill. Aphids will generally move into paddocks from roadsides and damage will first appear on crop edges. Turnip aphids are usually found on the terminal flowering spikes. Aphid distribution may be patchy, so monitoring should include at least five sampling points over the paddock. Inspect at least 20 plants at each sampling point. For disease-prone areas, regular aphid monitoring from autumn onwards is recommended to detect aphids moving into crops, particularly along paddock edges.

Symptoms of virus infections are very variable, from no visual indication, to stunted red plants and stiffening of leaves for BWYV, chlorotic ring spots and mottling for CaMV and yellow mosaic patterning and tip necrosis for TuMV. Autumn is the critical infection period; the earliest-sown crops usually have the highest infection incidence. CMV infection causes lupin leaves to become pale, bunched, and down curled with faint mosaic. In plants that grow from infected seed, all leaves develop these symptoms and these plants are severely stunted.

There are many effective natural enemies of aphids. Hoverfly larvae, lacewings, ladybird beetles and damsel bugs are known predators that can suppress populations. Aphid parasitic wasps lay eggs inside bodies of aphids and evidence of parasitism is seen as bronze-coloured enlarged aphid ‘mummies’. As mummies develop at the latter stages of wasp development inside the aphid host, it is likely that many more aphids have been parasitised than indicated by the proportion of mummies. Naturally occurring aphid fungal diseases (Pandora neoaphidis and Conidiobolyus obscurus) can also suppress aphid populations.

Control summer and autumn weeds in and around crops, particularly wild radish and wild turnip, to reduce the availability of alternative hosts between growing seasons. Where feasible, sow into standing stubble and use a high sowing rate to achieve a dense crop canopy, which will assist in deterring aphid landings.

The use of insecticide seed treatments can delay aphid colonisation and reduce early infestation, aphid feeding and the spread of viruses.

A border spray in autumn/early winter, when aphids begin to move into crops, may provide sufficient control without the need to spray the entire paddock. Imidacloprid is registered as an insecticide seed treatment against turnip aphids, however there are no foliar sprays registered specifically for this species.

Avoid the use of broad-spectrum ‘insurance’ sprays and apply insecticides only after monitoring and distinguishing between aphid species. Consider the populations of beneficial insects before making a decision to spray, particularly in spring when these natural enemies can play a very important role in suppressing aphid populations if left untouched.

Hainan GU, Fitt GP and Baker GH. 2007. Invertebrate pests of canola and their management in Australia: a review. Austral Entomology 46: 231-243.