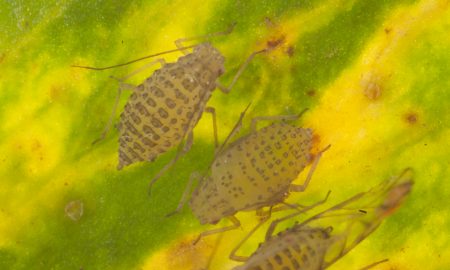 The spotted alfalfa aphid is a widespread pest in Australia. The aphids are average sized, yellow-green coloured and distinguished from other aphids by the distinctive rows of tiny spots on their back. They are found in lucerne and various legume pastures. Spotted alfalfa aphids are generally most numerous in autumn and capable of transmitting numerous plant viruses. The aphids can be suppressed with heavy grazing or harvest, and border or spot sprays.

Spotted alfalfa aphids were introduced to Australia in 1977. They are recorded as a minor pest of lucerne and clover pastures in Queensland, New South Wales, Victoria, South Australia, Tasmania and Western Australia. They are most numerous in autumn, but are also active in spring and summer.

Adults are pale yellow-green in colour and about 2 mm long. They have 4 to 6 rows of tiny black spots running lengthwise on their backs, which are just visible to the naked eye. Adults may be winged or wingless. Nymphs are similar to adults but are smaller in size and do not have wings. There are two biotypes of spotted alfalfa aphid present in Australia. One biotype predominately attacks lucerne and medics, while the other (sometimes referred to ‘spotted clover aphid’) predominately attacks clovers. These two biotypes are morphologically indistinguishable but genetically distinct.

Winged aphids fly into crops from broad leaf weeds, pasture legumes and medics, and colonies of aphids start to build up within the crop. Aphids can reproduce both asexually and sexually, however in Australia, the sexual phase is often lost. Aphids reproduce asexually whereby females give birth to live young, which are often referred to as clones.

Spotted alfalfa aphids thrive in warm dry conditions and are usually most active during late spring, summer and autumn, but they can survive cooler weather. There can be as many as 20–40 generations per year. The optimum temperature range for their development is 26–29˚C. An early autumn break tends to favour spotted alfalfa aphids.

Spotted alfalfa aphids are normally found on the undersides of leaves on host plants. They tend to ‘jump off’ the plant when disturbed.

Other aphids, in particular the bluegreen aphid and green peach aphid.

Adults and nymphs suck sap and inject a toxin into the plant. Initial symptoms are a yellowing or whitening of the leaf veins and plant wilting; leaves subsequently fall off. Damage proceeds from the base of the plant upwards, until only stems remain standing and plant death can occur. In high infestations, secretion of honeydew can cause secondary fungal growth (black sooty mould), which inhibits photosynthesis and can decrease plant growth and palatability to stock.

Regularly monitor seedling and established lucerne and pastures for infestations during autumn, when spotted alfalfa aphids are most active. Early sown pastures are most at risk, especially when warm conditions follow an early autumn break. Aphid distribution is often very patchy, so at least five sampling points of 20 plants each should be inspected over the paddock. Visually search the underside of leaves where these aphids generally colonise. Look for clusters of aphids or symptoms of leaf yellowing or leaf wilting and record the number of aphids observed. Winged aphids typically move into paddocks from roadsides and damage will first appear on crop edges.

Monitoring after rain or overhead irrigation is not advised as the aphids may be temporarily dislodged. Heavy rain events or sustained frosts will reduce aphid infestations. If heavy rain occurs after a decision to spray has been made, but before the insecticide has been applied, check the crop again to determine if treatment is still required.

When damage is apparent, consider the degree of aphid tolerance of the cultivar, the availability of moisture and the incidence of predators and parasitoids before deciding whether chemical control is necessary. In general, chemical control is probably only cost-effective for seed crops (Bailey 2007).

There are many effective natural enemies of aphids. Hoverfly larvae, lacewings, ladybird beetles and damsel bugs are known predators that can suppress populations. Aphid parasitic wasps lay eggs inside bodies of aphids and evidence of parasitism is seen as bronze-coloured enlarged aphid ‘mummies’. As mummies develop at the latter stages of wasp development inside the aphid host, it is likely that many more aphids have been parasitized than indicated by the proportion of mummies.  Naturally occurring aphid fungal diseases (Pandora neoaphidis and Conidiobolyus obscurus) can also affect aphid populations.

Lucerne varieties resistant to spotted alfalfa aphids are the main management strategy against this aphid and are essential in all parts of Australia.

There are several insecticides registered against spotted alfalfa aphids in lucerne and pastures. Pirimicarb provides effective control and has little impact on beneficial insects compared with broad-spectrum chemicals. A border spray in late summer, autumn when aphids begin to move into crops, may provide sufficient control without the need to spray the entire paddock.

Edwards OR, Franzmann B, Thackray D and Micic S. 2008. Insecticide resistance and implications for future aphid management in Australian grains and pastures: a review. Australian Journal of Experimental Agriculture 48: 1523-1530.