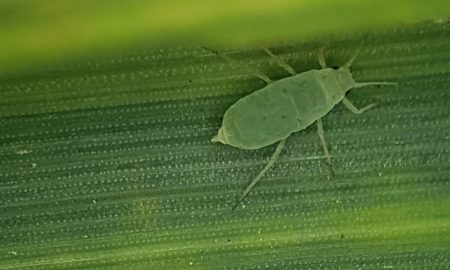 Around the world, the distribution of RWA is primarily associated with cereal production regions characterised by relatively warmer, drier climates. It is less prevalent or nonexistent in higher rainfall areas. It is native to southern Russia, the Middle East and Central Asia but since the late 1970s and early 1980s, has rapidly spread to other major grain producing regions in Europe, Africa, North America and South America.

Russian wheat aphid was first detected in Australia in May 2016, in an early sown wheat crop in the Mid North of South Australia. It has since been confirmed as widespread in cereal growing regions of South Australia, Victoria and New South Wales, and present in Tasmania. This species has a wide range of Graminaceous host plants including cultivated and wild grasses that occur widely throughout Australia. Russian wheat aphid has a history of successfully invading new regions, partly due to its widely available host plants and capacity for rapid population growth. Aphids could potentially disperse to new areas on contaminated plant material, on machinery and other equipment, or via dispersal of winged adults over large distances by wind assisted flight.

The RWA is up to 2 mm in length, pale green in colour, elongate and spindle-shaped, often with a fine dusting of whitish wax. Apterous (wingless) adults have very short antennae, about 0.33 – 0.5 of body length, and very short siphunculi (‘exhaust pipes’), that initially appear absent to the naked eye. The alate (winged) adults have body-length antennae and are generally darker in colour with dusky colouration on parts of the body, particularly the thorax. They have two caudal processes (short tails) on the end of the abdomen, one above the other, giving the appearance of a ‘double tail’ under magnification (see image). Their general small size, green colour, elongate shape, very short antennae and apparent lack of siphunculi are characteristics that readily distinguish RWA from other aphids found in Australian cereal crops.

In its native range the life history of RWA includes sexual and asexual phases. However, like most other introduced aphid pests in Australia, invasive populations of RWA reproduce asexually with females giving birth to live female offspring.

In autumn, aphids may infest wheat seedlings soon after emergence, usually from wingless aphids walking off nearby senescing hosts. Russian wheat aphid requires actively growing plants for development. Population growth begins from tillering and stem elongation and becomes most rapid from booting onwards. Early in the crop cycle, the vast majority of aphids are wingless. Later in the crop cycle as aphid population density increases, the proportion of winged aphids increases and may reach high levels prior to ripening. At this stage, aphids emigrate in search of alternative summer hosts.

Russian wheat aphid is able to survive under a wide range of temperatures and may perform better at lower temperatures than other cereal aphid pests. However, higher temperatures (>25°C) may limit the distribution of RWA. Under laboratory conditions, generation time ranges from approx. 20 days at 10°C, and 9 days at 20°C.

Aphids regularly move by walking among leaves, tillers and plants. Percentage of infested plants increases during the crop cycle. Winged RWA are weak flyers, but can travel on wind currents efficiently enough for aphids to locate isolated host plants.

Other cereal aphids, particularly rose-grain aphid in shape and colour, but can be easily distinguished by the apparent lack of siphunculi (‘exhaust pipes’)

The host range of RWA includes more than 140 species of cultivated and wild plants within the family Graminae (grasses). These include wheat, barley, triticale, rye, oats, pasture grasses and wild genera including Poa, Bromus, Hordeum, Lolium, Phalaris and others. Wheat and barley are most susceptible, while triticale, rye and oats are less susceptible. In South Africa, native grasses apparently do not host RWA.

Aphids feed in dense colonies, typically at the base and sheath of younger leaves and within leaves curled lengthwise by their feeding. Aphids prefer to feed on the newest leaves of plants and are often found on the last two leaves unfurled. At high densities they can be found on any foliar parts.

Even few aphids can cause symptoms to appear as early as seven days after infestation. Damage symptoms are characterised by (also see images) longitudinal rolling of leaves, forming a hollow tube inside which aphids shelter; whitish, yellowish to pink-purple chlorotic streaks along the length of leaves. Heavily infested plants are often stunted and may appear flattened, with tillers lying almost parallel to the ground. Viewed from a distance, damage may appear as a general loss of colouration across the affected crop area. Later in the crop cycle, wheat awns may become trapped by rolled leaves resulting in a hook-shaped head, and bleaching, resulting in reduced yield. Economic damage is primarily caused by direct feeding, with little evidence of significant transmission of plant viruses where it occurs overseas.

Damage symptoms are characterised by longitudinal rolling of leaves, forming a hollow tube inside which aphids shelter; whitish, yellowish to pink-purple chlorotic streaks along the length of leaves.

The salivary toxins injected by RWA during feeding damages plant chloroplasts, resulting in reduced photosynthetic ability, delayed leaf initiation and tillering, reduced numbers of fertile tillers, shoot and root biomass, grains per ear and grain weight. Yield impacts are determined by the percentage of infested tillers and plants and crop development stage. Heavy infestations during early growth can cause serious damage. From early booting to soft dough stage, feeding on upper leaves, in the leaf sheath and next to the developing head, can cause direct yield losses. In wheat and barley, damaged leaf tissue does not recover. If aphids are controlled, new growth proceeds normally (new root and shoots are unaffected) and plants may recover unless excessively stressed. After soft dough stage, further impact is minimal.

Economic thresholds (ET) are yet to be established under Australian conditions but guidelines are available overseas. Guidelines from the United States vary somewhat between regions, but for early season growth, an ET of 20% seedlings infested up to the start of tillering, and 10% seedling infested thereafter, is recommended.

Like other aphids, populations of RWA are strongly regulated by environmental conditions. Survival of aphids outside the shelter of leaf rolls is affected by exposure to rainfall, drying winds, and predators and parasitoids. Rainfall often washes aphids from upper leaves and heavy rainfall may cause 50% mortality.

In certain regions around the world, wheat cultivars with resistance to RWA are deployed. In some regions, ‘virulent’ aphid biotypes have developed that have overcome host resistance genes.

Cultural controls include eliminating refuge volunteer cereals and grasses in fallows and other areas during summer and autumn, later planting of winter cereals to delay and reduce early aphid infestation, and agronomic practices to promote crop vigour and dense canopy growth which inhibit RWA populations and reduces their impact on the crop.

Chemical control of RWA is effective. Due to the cryptic feeding habits of RWA, complete coverage and use of an insecticide with fumigant or systemic activity is required. Organophosphate insecticides can be effective, but broad spectrum products have the side effect of destroying many natural enemies. Seed treatments offer some early season protection. Decisions on the need for foliar treatments are based on the proportion of seedlings or tillers infested.

Permits have been issued by the APVMA for use of imidacloprid seed dressing (PER82304), pirimicarb and chlorpyrifos (PER82792) against RWA in winter cereals. See individual permits for specific terms of use.

This article was compiled by Kym Perry (SARDI) and Bill Kimber (SARDI).

Hughes RD and Maywald GF. 1990. Forecasting the favourableness of the Australian environment for the Russian wheat aphid, Diuraphis noxia (Homoptera: Aphididae), and its potential impact on Australian wheat yields. Bulletin of Entomological Research. 80:165-75.