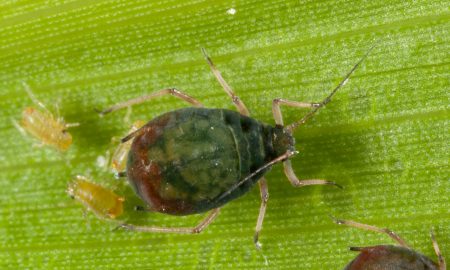 The oat aphid is a relatively common aphid that is most prevalent in wheat and oats. This aphid has an olive green body with a characteristic rust-red patch on the end of the abdomen. Oat aphids are an important vector of barley yellow dwarf virus (BYDV). They can affect cereals by spreading BYDV as well as by direct feeding damage to plants, although only in high numbers. When populations exceed thresholds, the use of targeted spraying with selective insecticides is recommended.

The oat aphid is an introduced species that is a common pest of cereals and pasture grasses. They are widespread and found in all states of Australia. Oat aphids typically colonise the lower portion of plants, with infestations extending from around the plant’s base, up on to the leaves and stems.

The most abundant species of cereal aphids that is most prevalent in wheat and oats.

Oat aphids vary in colour from olive-green to greenish black and are usually identifiable by a dark rust-red patch on the tip of the abdomen, although under some conditions this is not apparent. Adults are approximately 2 mm long, pear-shaped and have antennae that extend half the body length. Adults may be winged or wingless and tend to develop wings when plants become overcrowded or unsuitable.

Oat aphids can be found all year round often persisting on a range of volunteer grasses and self-sown cereals during summer and early autumn. Winged aphids fly into crops from grass weeds, pasture grasses or other cereal crops, and colonies of aphids start to build up within the crop. Aphids can reproduce both asexually and sexually however in Australia, the sexual phase is often lost. Aphids reproduce asexually whereby females give birth to live young.

Temperatures during autumn and spring are optimal for aphid survival and reproduction. During these times, the aphid populations may undergo several generations. Populations peak in late winter and early spring; development rates are particularly favoured when daily maximum temperatures reach 20-25°C.

Nymphs, which do not have wings, go through several growth stages, moulting at each stage into a larger individual. When plants become unsuitable or overcrowding occurs, winged aphids, called alatae, develop and migrate to other plants or crops.

Colonies develop on the outside of tillers from the base upwards, and on stems, nodes and the undersides of mature leaves. Oat aphids are typically found on the upper portion of the plant, particularly in the tightly furled emerging leaves. Oat aphids will often be observed infesting cereal crops earlier in the season than corn aphids.

Other aphids, particularly cereal aphids such as the corn aphid and rose-grain aphid.

Predominantly attack oats and wheat, but can occur on all cereals and grasses. Also attacks corn. During summer and early autumn oat aphids may be found on a range of volunteer grasses and self-sown cereals.

Oat aphids can invade crops at any time between seedling stage and grain fill. Early infestations can cause reduced tillering, stunting and early leaf senescence. Later infestations on leaf sheaths and flag leaves between booting and the milky dough stages can also result in yield losses. In some cases, aphid colonies infest the seed heads and congregate in large numbers. After grain fill, aphid feeding has minimal or no impact on yield. Secretion of honeydew can cause secondary fungal growth, which inhibits photosynthesis and can decrease plant growth.

Visual symptoms of oat aphid attack are often not obvious until close inspection of leaf whorls and sheaths, where dark-coloured masses of aphids may be seen.

Oat aphids cause indirect damage by spreading plant viruses. Aphids spread viruses between plants by feeding and probing when they move between plants and paddocks. The ability to transmit particular viruses differs with each aphid species and viruses may be transmitted in a persistent or non-persistent manner. This influences the likelihood of plant infection.

Oat aphids transmit a number of important plant diseases, including barley yellow dwarf virus (BYDV), cereal yellow dwarf virus (CYDV), cucumber mosaic virus (CMV) and pea seed-borne mosaic virus (PSbMV). BYDV and CYDV are persistent viruses. Once an aphid acquires the virus after feeding from the phloem of an infected plant it will continue to transmit the virus to any plant it feeds on for it’s entire life. BYDV and CYDV infection decreases grain yield and also causes shriveled grain. Virus infections are more common in high rainfall cropping zones where virus infected self-sown cereals and grasses are present, along with large numbers of aphids during the early growth stages of new season crops.

Early virus infections typically result in higher levels of damage. Plants infected after tillering have milder symptoms and yields are less severely affected. In susceptible cereal varieties, where the entire crop is infected by BYDV soon after sowing, yields of wheat, barley and oats can fall by up to 80 %. If the crop is infected late, yield may be reduced by only 10 to 20%.

Oat aphids can damage cereals through direct feeding and by transmitting a number of plant viruses, including barley yellow dwarf virus.

Oat aphids are often first identified in the ‘crown’ region of plant at or near ground level. Regular monitoring for aphids should start in late winter and continue through to early spring with more frequent monitoring at the most vulnerable crop stage (stem elongation to late flowering). Aphids will generally move into paddocks from roadsides and damage will first appear on crop edges. Infestations can be patchy.

Inspect crops from the 3-leaf stage onwards by direct visual observations of tillers and plant margins. Check 5 tillers at 6 sites within each paddock. Sampling should occur away from the crop edge to assess the infestation levels within a representative area of the paddock.

Symptoms of BYDV infections are very variable and include yellowing, reddening and striping of leaves. These symptoms can be confused with those caused by nutrient deficiencies, waterlogging or other plant stresses that cause. Leaf symptoms differ between wheat, oats and barley. The severity depends on the age of the plant at infection, environmental conditions, the virus present and the cereal variety involved.

There are many effective natural enemies of aphids. Watch this video for the range of natural enemies that were found in a barley crop. Hoverfly larvae, lacewings, ladybird beetles and damsel bugs are known predators that can suppress populations. Aphid parasitic wasps lay eggs inside bodies of aphids and evidence of parasitism is seen as bronze-coloured enlarged aphid ‘mummies’. As mummies develop at the latter stages of wasp development inside the aphid host, it is likely that many more aphids have been parasitized than indicated by the proportion of mummies. Naturally occurring aphid fungal diseases (Pandora neoaphidis and Conidiobolyus obscurus) can also suppress aphid populations.

Control summer and autumn weeds in and around crops, particularly volunteer cereals and grasses, to reduce the availability of alternate hosts between growing seasons.

Where feasible, sow into standing stubble and use a high sowing rate to achieve a dense crop canopy, which will assist in deterring aphid landings.

Delayed sowing avoids the autumn peak of cereal aphid activity and reduces the incidence of BYDV. However, delaying sowing generally reduces yields, and this loss must be balanced against the benefit of lower virus incidences.

The use of insecticide seed treatments can delay aphid colonisation and reduce early infestation, aphid feeding and the spread of viruses such as BYDV. In a US trial with imidacloprid treated seed, BYDV-infected aphids did transmit the virus to treated plants but at a rate equivalent to about half that of the untreated seedlings.

There are several insecticides registered against oat aphids. Check the APVMA website for current chemical options. Pirimicarb provides effective control and has little impact on beneficial insects compared with broad-spectrum chemicals. A border spray in autumn/early winter, when aphids begin to move into crops, may provide sufficient control without the need to spray the entire paddock. Oat aphids at the base of plants can prove difficult to control in dense crops.

Avoid the use of broad-spectrum ‘insurance’ sprays and apply insecticides only after monitoring and distinguishing between aphid species. Consider the populations of beneficial insects before making a decision to spray, particularly in spring when these natural enemies can play a very important role in suppressing aphid populations if left untouched.

Finlay KJ and Luck JE. 2011. Response of the bird cherry-oat aphid (Rhopalosiphum padi) to climate change in relation to its pest status, vectoring potential and function in a crop–vector–virus pathosystem. Agriculture, Ecosystems & Environment 144: 405-421.