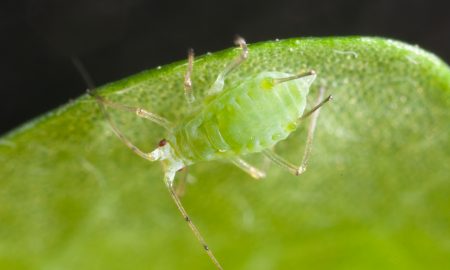 Bluegreen aphids are widespread in Australia. They are most common in spring but are also active in autumn and winter. Heavy infestations can cause damage to plants by direct removal of nutrients, deforming leaves and causing plants to wilt and become yellow. Bluegreen aphids are grey-green to blue-green coloured, attacking lupins, lucerne, medics and clovers. They are distinguished from other aphids by their long legs, antennae and cornicles.

Bluegreen aphids are widely distributed and found in all states of Australia. They are most common in spring but are also active in autumn and winter. Occurrences of damaging numbers in pasture legumes are irregular.

Adults grow up to 3 mm long, are oval shaped, with long legs and antennae. They have two large cornicles that extend beyond the base of the abdomen. Both the winged and wingless forms are a matte bluish-green colour. Nymphs are similar to adults but are smaller in size.

Winged aphids fly into crops from broad leaf weeds, pasture legumes and medics, and colonies of aphids start to build up within the crop. Aphids can reproduce both asexually and sexually, however in Australia, the sexual phase is often lost. Aphids reproduce asexually whereby females give birth to live young, which are often referred to as clones.

Nymphs, which do not have wings, go through several growth stages, moulting at each stage into a larger individual. Mature females can produce many generations during the growing season. Development rates are dependent on temperature and either cooler, or extremely hot temperatures slow development.

Other aphids, in particular the green peach aphid and pea aphid.

Bluegreen aphids cause feeding damage to upper leaves, stems and terminal buds of host plants. Heavy infestations can cause damage to plants by direct removal of nutrients, deforming leaves and causing plants to wilt and become yellow. In lucerne and medics, heavy infestations cause stunted growth, leaf curling and leaf drop. Dry matter production can be reduced. Secretion of honeydew can cause secondary fungal growth, which inhibits photosynthesis and can decrease plant growth.

In general, aphids have the greatest impact on crops when soil moisture is limited, and in these instances yields can be reduced. In 2010 there were reports of a new, more virulent bluegreen biotype that caused damage to some varieties of lentils, annual medic and sub-clover that were previously thought to be tolerant to bluegreen aphids.

Regularly monitor vulnerable crops during bud formation to late flowering. Aphids will generally move into paddocks from roadsides and damage will first appear on crop edges. Aphid distribution may be patchy, so monitoring should include at least 5 sampling points over the paddock. Inspect at least 20 plants at each sampling point. Visually search for aphids looking at the youngest inflorescence of each plant. Look for clusters of aphids or symptoms of leaf-curling.

• WA: >30% of inflorescences infested with 30 or more aphids, however, also take into account the aphid tolerance of the variety (Berlandier 1999)

There are many effective natural enemies of aphids. Hoverfly larvae, lacewings, ladybird beetles and damsel bugs are known predators that can suppress populations. Aphid parasitic wasps lay eggs inside bodies of aphids and evidence of parasitism is seen as bronze-coloured enlarged aphid ‘mummies’. As mummies develop at the latter stages of wasp development inside the aphid host, it is likely that many more aphids have been parasitized than indicated by the proportion of mummies. Naturally occurring aphid fungal diseases (Pandora neoaphidis and Conidiobolyus obscurus) can also affect aphid populations.

Select cultivars that are less susceptible to aphid feeding damage. Sow crops early to enable plants to begin flowering before aphid numbers peak in spring. Control summer and autumn weeds in and around crops to reduce the availability of alternate hosts between growing seasons. Use a high sowing rate to achieve a dense crop canopy, which will assist in deterring aphid landings.

There are several insecticides registered against bluegreen aphids in legume and pulse crops. Pirimicarb provides effective control and has little impact on beneficial insects compared with broad-spectrum chemicals. A border spray in autumn/early winter, when aphids begin to move into crops, may provide sufficient control without the need to spray the entire paddock. The use of insecticide seed treatments can delay aphid colonisation and reduce early infestation and aphid feeding.

Before making spray decisions, monitor for beneficial insects. Insecticide applications generally harm beneficials, many of which are more susceptible to broad-spectrum chemicals than pest insects.

Edwards OR, Franzmann B, Thackray D and Micic S. 2008. Insecticide resistance and implications for future aphid management in Australian grains and pastures: a review. Australian Journal of Experimental Agriculture 48: 1523-1530.